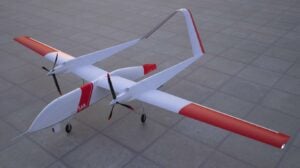 The MA THOR Twin is a versatile aircraft used in civilian and commercial missions as diverse as remote sensing and mapping, land and maritime border patrol, sea and land search and rescue, long endurance persistent surveillance, monitoring of oil and gas installations and pipelines, inspection of natural disasters, ecological work, firefighting, and many other.

The MA THOR Twin is a high-wing twin-tail-boom aircraft with a fuselage shaped for low radar detection. The airframe is reinforced graphite, Kevlar and epoxy resin and it is sealed for long life in hot and humid environments. The airframe can be fitted with a rail or pod under each wing for carriage of external stores, such as additional fuel tanks. The aircraft is powered by two 4-stroke twin-opposed cylinder engines mounted above the wings that drive three-blade propellers and provide high vehicle endurance. Enhanced aerodynamics and flight stability principles permit the MA THOR Twin UAS to complete missions in the most demanding flight environments. The wings use a high-lift stall-resistant airfoil, have an aspect ratio of 10 and are fitted with flow control devices. The wings feature dihedral, geometric washout, taper, and sweepback. Wingtip devices reduce induced drag.

SATCOM
The MA THOR Twin UAS offers an advanced satellite communication data link and is operated from a universal command & control ground station (UGCS), enabling advanced mission management, highly autonomous and mission effective operation, and automatic takeoff and landing capability. Satellite communications (SATCOM) provide significantly enhanced mission flexibility. Leveraging SATCOM and the MA THOR Twin’s long endurance, the system can perform missions at very long distances from the operating base. SATCOM allows the MA THOR Twin to fly at very low altitudes, without the limitation of line of sight obstruction caused by topography. In fact, there is no need for line of sight between the aircraft and its GCS.

Hyperspectral Imaging
Innovative hyperspectral technology enables imaging of the region of interest at different wavelengths. This imaging payload tracks spectral signature of the imaged materials, which is unique to every material in nature. The innovative hyperspectral technology introduces a new, additional dimension to the world of surveillance by enabling detection and tracking of targets on the basis of their material signature. The new payload enables intelligence gathering via identification, measurement and tracking of materials and objects including uncovering low signature target activity and invisible obstacles, as well as identification of hazardous materials. The airborne hyperspectral system is complemented by a ground segment that provides automatic interpretation of the images.

Universal Ground Control Station (UGCS)
Capable of controlling multiple types of UAS, the UGCS support all phases from mission planning and preflight checks, through mission execution, debrief and training. The UGCS is capable of concurrently controlling two parallel UAS missions using two Ground Data Terminals (GDTs). A high level of system autonomy enables the operator to focus on mission execution, rather than on flying the air vehicle. Typically, the same operator can control both the air vehicle and the EO/IR/Laser payload.