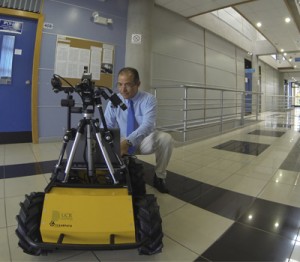 Dr. Geovanni Martinez from the University of Costa Rica has developed a novel visual odometer algorithm for accurate and more efficient tracking of Mars rover navigation. Dr. Martinez is utilizing Clearpath Robotics’ Husky to test and validate the algorithm that uses one-stage maximum-likelihood estimation, rather than traditional two-stage algorithms.

“It’s fantastic to witness breakthrough research of this nature, and to know that it is being validated and furthered because of our mobile robotic platform,” said Matt Rendall, Chief Executive Officer at Clearpath Robotics.

Dr. Martinez’ team is creating a real time image acquisition system consisting of three IEEE-1394 cameras. The system is being developed under Ubuntu 12.04.2 LTS, ROS Fuerte and the programing language C”. The image acquisition system corrects, in real time, the radial and tangential distortions due to the camera lens. With regard to the hardware, Dr. Martinez commented, “We like Husky A200 because the software for image acquisition, and driving the robot, was easy to implement using ROS. It saved us a lot of development time. Additionally, it is strong enough to be driven in extreme environments.”