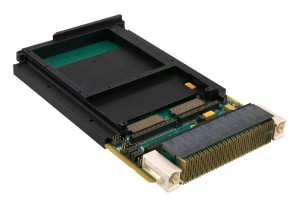 The VPX3-133 rugged computer is available in either air-cooled or conduction-cooled variants. Its integral high-speed backplane fabrics and XMC mezzanine module connectivity support multi-GB/s data flows from board-to-board, both through the VPX3-133’s backplane interface and from the backplane to its XMC site. The board is designed to deliver the high bandwidth processing needed to handle the acquisition, processing, and distribution of sensor data required by demanding defense and aerospace applications such as video, radar, and sonar. The VPX3-133 is equally well suited for use as a mission computer, display computer, or in SIGINT and motor control applications.

“Freescale’s new QorIQ T2080 processor’s IO capabilities combined with its MIPS per watt performance make it the ideal processor for use in a next generation SBC where SWaP performance is key”, said Lynn Bamford, senior vice president and general manager of Curtiss-Wright Controls Defense Solutions. “The T2080 enables our VPX3-133, with its simple and clean design, to provide a significant amount of processing power in a low power footprint. Combined with Freescale’s Trusted Boot™ Architecture and our Trusted COTS™ technology, the VPX3-133 provides a powerful solution for customers seeking an SBC for use in domestic and foreign military sales applications where performance and information assurance are required.”

The VPX3-133 is an ideal SBC for applications in which maximum amounts of compute processing is key. With its T2080 running at 1.5GHz, along with up to 8GB of DDR3 memory, the VPX3-133 provides an ideal platform for consolidating multiple applications onto a single processor. When combined with Curtiss-Wright’s graphics solutions, such as our XMC-715 graphics mezzanine card, system designers get a very powerful processor and graphics capability ideal for use in any high performance mission and display computer. The VPX3-133 is backward pin-compatible with earlier Curtiss-Wright 3U Power Architecture SBCs (such as the VPX3-127) as well as pin-compatible in specific configurations with Curtiss-Wright’s Intel® Core™i7-based VPX3-1257 SBC, and our newly announced Freescale P4080 QorIQ Octal Power Architecture processor-based VPX3-131 SBC.

Ideal for use in SWaP-constrained applications, the VPX3-133 provides an impressive amount of processing power with industry leading MIPS/Watt performance. It also has been designed to support programs that require a path to safety certification. For applications that demand the highest levels of hardware and software protection, the VPX3-133 provides advanced anti-tamper and information

The VPX3-133 complements Curtiss-Wright’s wide range of SBCs, Digital Signal Processors, Graphics, Communications and I/O products. It is pinout compatible with other Curtiss-Wright SBCs, providing customers with the ability to seamlessly upgrade existing systems as well as change technology. As with our other SBCs, the VPX3-133 is fully compatible with a variety of Curtiss-Wright products with which it can be combined to provide a fully integrated solution. These include Curtiss-Wright’s quad-port 1553 XMC-603, XMC-651 Ethernet switch, XMC-715 Graphics Controller, and the VPX3-215 3U mezzanine carrier.