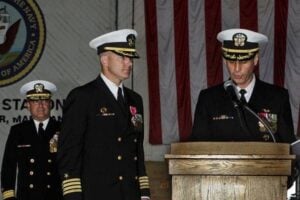 “When you do things that are truly history making, never been done before in the history mankind, it gets people’s attention…and that’s not being melodramatic,” Winter said.

“Monikers such as ‘first ever’, ‘worlds’ best’, ‘history making’ become commonplace and you sit there and say, how can that be when we’re talking about software and pieces of metal in the sky – that’s not history making. We do that. We’ve done that. It’s not trivial and we continue to celebrate naval aviation… (And this team) took the art of the possible and made it the science of reality.”

Winter also recognized the superlative efforts of his outgoing and incoming program managers.

“The first time I met Jaime (Engdahl), he was focused on the people and the mission and, as we all know, the right people in the right job can make the mission much more successful. His ability to engage and set the course of the Unmanned Combat Air System program office is unmatched.

Duarte who previously served as the Naval Air Systems Command’s (NAVAIR) deputy program manager for Spectrum Dominance for the F/A-18 and EA-18G Program Office, is no stranger to the unmanned aircraft community.

“Fourteen years ago this month, at the then Naval Strike Aircraft Test Squadron now known as VX-23, I replaced Lt. Engdahl as UAV Project Officer developing aircraft and technologies for the Navy’s nascent unmanned fleet,” Duarte said. “At that time, our flight test workhorse was the BQM-147A Exdrone, a 90-pound fiberglass propeller-driven flying wing with a six foot wingspan and a two-stroke gas motor outputting out a whopping 9 horsepower. Contrast that with today’s workhorse at VX-23 sitting behind you, the 40,000 lb turbojet powered X-47, which, if you hadn’t heard, recently made aviation history by taking off and landing at the carrier – a laughably unthinkable task 14 years ago.”

As for Engdahl, the legacy he leaves behind is one he said he will always cherish.

“More importantly, as the sounds and smell of the flight deck, jet exhaust and hot steam coming off the catapults fades into our memory. Beyond all of the prestigious awards and notable recognition, everyone on Team U-CAS will leave this program with a special, lifetime honor. “We can all say ‘I was there when X-47B trapped aboard Bush; I was a part of Naval Aviation history!’

Engdahl’s next assignment will be as program manager for NAVAIR’s Precision Strike Weapons Program Office.

Thursday’s ceremony also marked the official redefinition of PMA-268, as the program welcomed the Unmanned Carrier Launched Surveillance and Strike System Advanced Developmental program office (UCLASS ADPO) into the fold. The new program is responsible for managing UCAS-D and UCLASS while continuing to prove unmanned capability in the dynamic carrier environment.