“It isn’t very often you get a glimpse of the future. Today, those of us aboard USS George H.W. Bush got that chance as we witnessed the X-47B make its first ever arrested landing aboard an aircraft carrier,” said Secretary of the Navy Ray Mabus. “The operational unmanned aircraft soon to be developed have the opportunity to radically change the way presence and combat power are delivered from our aircraft carriers.”

This test marks an historic event for naval aviation that Navy leaders believe will impact the way the Navy integrates manned and unmanned aircraft on the carrier flight deck in the future. 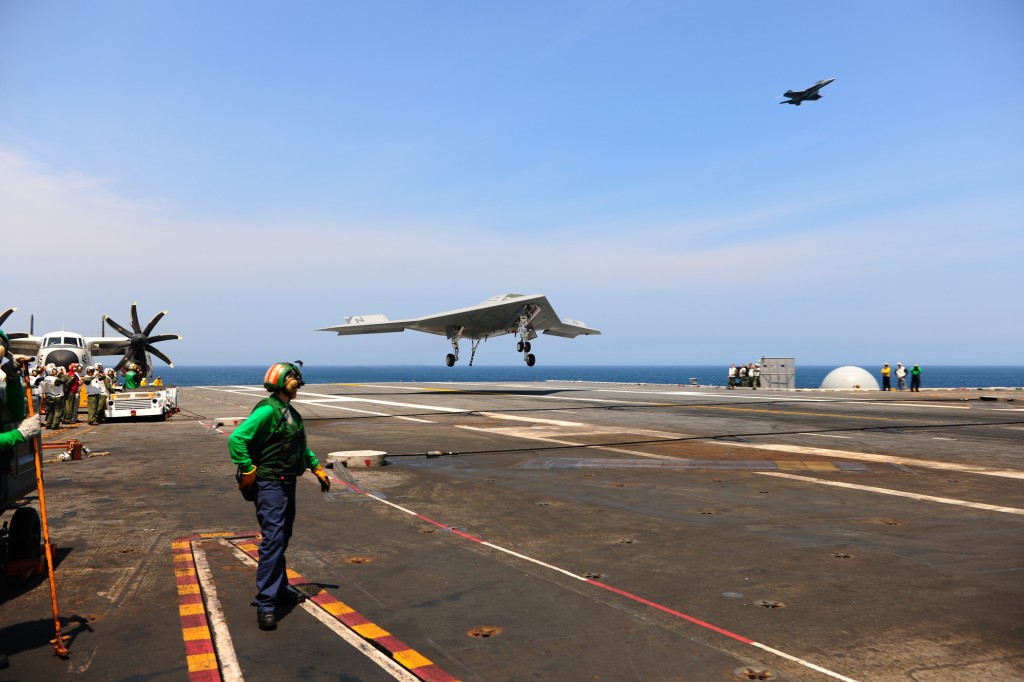 The July 10 landing was the beginning of the final part of three at-sea test periods for X-47B during the last eight months, culminating a decade of Navy unmanned integration efforts that show the Navy’s readiness to move forward with unmanned carrier aviation says Rear Adm. Mat Winter, who oversees the Program Executive Office for Unmanned Aviation and Strike Weapons in Patuxent River, Md.

“This demonstration has enabled us to merge industry and government technologies together which will enable the U.S. Navy to pursue future unmanned aviation carrier capabilities,” said Winter, who witnessed the historic landing. “The government engineering and testing team in partnership with our Northrop Grumman team members have matured the technologies in this X-47B system to position us for today’s event, which marks a milestone in naval aviation.”

During today’s testing, the X-47B completed the 35-minute transit from Pax River to the carrier and caught the 3 wire with the aircraft’s tailhook. The arrested landing effectively brought the aircraft from approximately 145 knots to stop in less than 350 feet.

Shortly after the initial landing, the aircraft was launched off the ship using the carrier’s catapult. The X-47B then proceeded to execute one more arrested landing.

On the third approach to Bush the X-47B aircraft self detected a navigation computer anomaly that required the air vehicle to transit to the assigned shore based divert landing site, Wallops Island Air Field. The X-47B navigated to and landed without incident.

“We have been using the same [carrier] landing technology for more than 50 years now and the idea that we can take a large UAV and operate in that environment is fascinating,” said Engdahl.

“Across the entire spectrum of military operations, an integrated force of manned and unmanned platforms is the future,” said Ray Mabus. “The X-47B’s autonomous arrested landing aboard USS George H.W. Bush shows how the Navy and Marine Corps are riding the bow wave of technological advances to create this 21st century force.”

The X-47B spent several weeks aboard aircraft carriers in recent months. The Navy UCAS program successfully completed CVN deck operations aboard USS Harry S. Truman (CVN 75) in December 2012 and aboard Bush in May. During the May underway period, the X-47B completed its first-ever catapult launch. Since May, the integrated test team conducted a number of shore-based arrestments at Pax River in preparation for the demonstration aboard the ship.

“We have learned a lot from our flight deck operations, our shore-based flight test and extensive modeling and simulation,” Engdahl added. “Our team has executed all major program objectives and developed the concept of operations and demonstrated technologies for a future unmanned carrier-based aircraft capability. [Today] we have proven we can seamlessly integrate unmanned systems into the carrier environment.”

“We have certainly come a long way in the 102 years since Eugene Ely made the first arrested landing aboard an aircraft carrier. Naval aviators have always been at the forefront of operational and tactical innovation, and today was no exception,” said Mabus. “People make unmanned aviation possible and it is people who will provide the fresh thinking and new ideas so crucial to successes like the X-47B program and the unmanned aircraft of the future.”