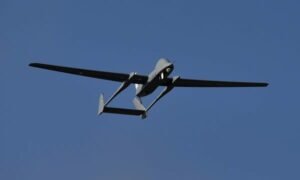 At the beginning of July, the Heron 1 UAS logged its 15,000th operational flight hour. The three systems, which are operated by Cassidian subsidiary Airborne Solutions on behalf of the Luftwaffe, are stationed in Mazar-e-Sharif in north Afghanistan where they are serviced by an experienced team of engineers, pilots and UAS specialists.

The Heron 1 unmanned reconnaissance system’s sensors deliver useful information round the clock for preparing and carrying out military operations. The integrated satellite datalink thereby enables the Bundeswehr and its Nato partners to monitor the entire northern half of Afghanistan, whose surface area of more than 300,000m2 almost equals the size of the Federal Republic of Germany. Heron thus makes a meanwhile invaluable contribution to protecting soldiers and the civilian population in the theatre of operations.

The unmanned reconnaissance system’s availability for monitoring ongoing operations from the air via real-time video has in the meantime become an essential criterion for carrying out operations. The Heron 1’s acceptance and unrestricted operational readiness is ensured by an on-site maintenance team from Cassidian, which guarantees the three aircraft and two ground segments’ readiness 24/7. So far, Heron 1 has logged more than 1,300 flights in Afghanistan.

Thomas Reinartz, Managing Director of Cassidian Airborne Solutions, emphasised: “With this system the Luftwaffe is performing leading services in comparison to other nations. The positive system and mission experience thus gained by the Luftwaffe and industry will be incorporated into future UAS use.”

Heron 1 is deployed by the Bundeswehr in a so-called operator model, on a leasing basis. Cassidian subsidiary Cassidian Airborne Solutions, headquartered in Bremen, is responsible for all maintenance work and ensures that the UAS are available to the Bundeswehr at a moment’s notice. The contract also provides for the take-offs and landings in Mazar-e-Sharif to be controlled by Cassidian “pilots”, after which the aircraft are handed over in the air to Bundeswehr personnel. The Bundeswehr is thus able to dedicate its full attention to completing its mission, as staff are not burdened with auxiliary tasks (take-off, landing, maintenance and repair).

Manufactured by the Israeli company IAI, Heron 1 is a medium altitude long endurance (Male) UAS for the respective theatre of operation. The aircraft has a wingspan of 17 metres and a maximum mission endurance of over 24 hours. Its tasks include detecting booby traps from the air, accompanying convoys and patrols, assisting forces in combat situations, reconnoitring and surveilling routes, establishing movement profiles and long-term monitoring, supporting situation assessments, and protecting property and military camps.