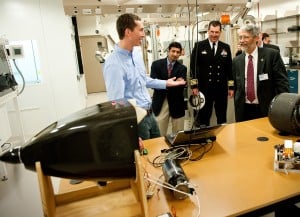 Scientists based in the nation’s capital are stepping into the desert and rainforest to run experiments on autonomous systems without having to set foot outside the Navy’s new robotics laboratory.

The Laboratory for Autonomous Systems Research (LASR), located at the Naval Research Laboratory (NRL) in Washington D.C., is the first addition to NRL’s 130-acre campus in nearly a decade. Encompassing approximately 50,000 square feet, LASR boasts facilities that reproduce Earth’s ecosystems, including a Tropical High Bay modeled after southeast Asian rainforests, a Littoral High Bay that simulates near-shore waters and a Desert High Bay with a rock wall that simulates a desert-like environment. 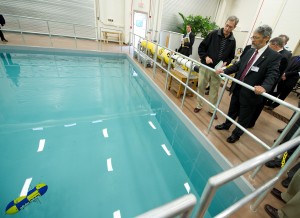 “It’s the first time that we have, under a single roof, a laboratory that captures all the domains in which our Sailors, Marines and fellow DOD service members operate,” said Rear Adm. Matthew Klunder, chief of naval research. “Advancing robotics and autonomy are top priorities for the Office of Naval Research. We want to reduce the time it takes to deliver capability to our warfighters performing critical missions. This innovative facility bridges the gap between traditional laboratory research and in-the-field experimentation-saving us time and money.”

The $17.7 million LASR building opened its doors to researchers on March 16. As the nerve center for robotic systems research in the Department of Defense, LASR brings together scientists and engineers from diverse fields to solve the nation’s autonomy challenges. 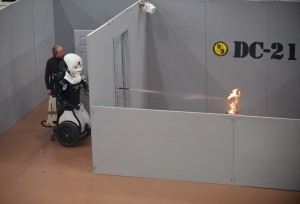 “The LASR capitalizes on the broad multidisciplinary character of NRL, bringing together scientists and engineers from diverse backgrounds to tackle common challenges in autonomy research at the intersection of their respective fields,” said Alan Schultz, director of LASR. “This one-of-a-kind laboratory provides specialized facilities to support highly innovative research and testing in intelligent autonomy, sensor systems, power and energy systems, human-system interaction, networking and communications and platforms without leaving NRL.”

Officials expect the number of projects to grow as researchers register to use the facility.