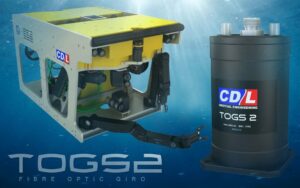 A revolutionary underwater true north seeking inertial system, developed by Aberdeen-based engineering company CDL for remotely operated vehicles (ROVs) and many other subsea applications, has won a major award from the subsea industry.

From its development just 24 months ago, the system, which comprises a three axis fiber optic gyro, has rapidly become accepted as an international industry standard for ROVs which rely on heading and motion guidance to carry out essential operations.

Small and light weight, the TOGS has become an effective alternative to high cost, overly specified systems as well as lower cost ‘spinning mass’ gyroscopes which can be prone to reliability issues.

It can be used in many underwater operations, particularly where space is limited and, with no moving parts and excellent shock resistance, provides a high degree of robustness and longevity. The system outputs all 6 degrees of freedom measurements to accurately track all aspects of an ROV or vessel motion. The surface variant of the system, TOGS-S, is fully IMO (International Maritime Organisation) certified for heading navigation for surface vessels up to 85 Knts.

Housing options for the system, which are available from the company’s bases in Aberdeen, Houston, Rio and Singapore, include a lightweight surface, 3,000m subsea, 4,000m subsea and 6,000m titanium. As an example, the 3,000m version weighs just 7kg.

CDL managing director Andy Doggett said: “The award from Subsea UK really reflects what an incredible impact TOGS has had on the global oil and gas ROV sector as an accurate, easy to use, low cost sensor. It is by far the most widely used attitude heading reference system in the ROV market and is essentially the de facto standard product for use worldwide.

“Although TOGS has been widely accepted as a ROV sensor, it can be deployed in various applications, including land surveys, seismic aviation, pipeline pigging, vessel guidance and in the military.