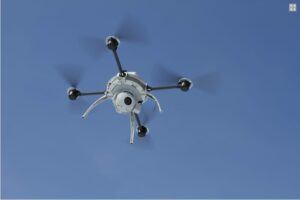 Operated by the University of Alaska Fairbanks (UAF) Unmanned Aircraft Program and supported by the U.S. Forest Service and the US Air Force, the system was deployed to help better understand how wildfires behave.

During a series of comprehensive field exercises, the Aeryon Scout™ was equipped with a range of sensors including, visible and long-wave infrared cameras, which were used to gather important data for the campaign dubbed “Rx-CADRE”, or “Combustion and Atmospheric Dynamics Research Experiment.” 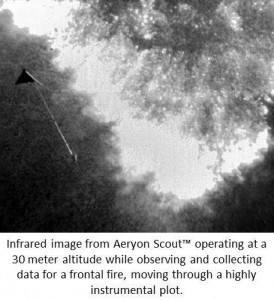 As part of Rx-CADRE, over a two week period, several thousand acres of highly instrumented forest and grassland were burned at different times while the Aeryon Scout™ collected data related to smoke transport, flame dynamics, fire progression, and fuel consumption to assist in the extensively monitored operations.

“The Scout provided a critical aerial perspective to help understand the changing fire behaviour. An additional task conducted by the Scout was to assess hotspots after the fire exercises were completed for potential flare-ups. This application was investigated and demonstrated a key benefit of small Unmanned Aerial Systems (sUAS), in monitoring a dangerous environment,” said Greg Walker, Director of the Alaska Center for Unmanned Aircraft Systems Integration.

“As a vertical take-off and landing (VTOL) platform, Scout operated in confined areas and provided persistent observation, despite turbulent wind conditions, including high winds of up to 30mph (48km/h), and changing air currents directly over the fire line,” he added.

UAF’s support and the use of Aeryon Scout™ were critical to UAF’s overall success of their high-priority research mission. The UAF Unmanned Aircraft Program team deployed to Elgin Air Force Base in Florida for two weeks to support the effort. This project also offered substantial advances in the use of sUAS for research and successfully combined the operation of multiple manned and unmanned aircraft within the same airspace – including up to 7 airborne platforms during three of the larger burns.

Rx-CADRE ran from October 29 to November 16, 2012 on Florida’s panhandle, at the Elgin Air Force Base.