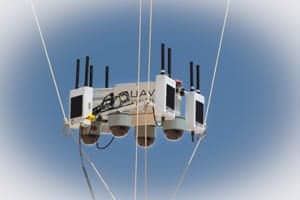 UAV Vision has announced the launch of its new complete turnkey Aerostat solution. The IP66 is suitable for harsh environments and can be operated in the desert for over 24 hours in all weather conditions.

The system was custom-designed to provide “an eye in the sky” crowd surveillance, covering hundreds of square kilometres with crowds in excess of two million. The system was deployed to assist with tasks such as identifying possible medical emergencies and to provide aerial guidance for the teams on the ground.

Operators had centralised control via the UAV Vision AI System software package, with a hierarchy of users: on a gimbal by gimbal basis, no access, view only, or view and control; all of which was routed through a VSAT to the central web server.

Communication, command/control, and video feeds were provided by a combination of fibre optic and dedicated high bandwidth IP Mesh Links. The IP Mesh network used medium range 1W IP links and the central Aerostat was fitted with 5 radios, whilst the surrounding Satellite Balloons were fitted with one each. All satellite balloons were within a radius of approximately 10-35Km at least from one another.

The central Aerostat (Communications Server) then beamed the IP streams down through a Fibre Optic cable to a ground control bus, where a 3G link and VSAT was set up to relay to the Web Server. Distances of over 25 km at 5Mbs were achieved, providing excellent video quality and high speed control of the gimbals.

The full system also included UAV Vision’s GEO-LOCK module, allowing internet users the ability to point the sensor at a Latitude and Longitude by simply clicking on the map or clicking on an object in the video image.

While the deployment involved daylight-only sensors, any of UAV Vision’s range of gimbals could have been used. A follow-up deployment using the CM160s is currently in the final testing phase.

The system could also be used for harbour or border control, event supervision, or asset/site surveillance. The Aerostats are easily deployed and can remain in the air for extended periods of time, with only 1% – 5% loss of helium per week.