France and Germany are set to renew efforts to work on a joint unmanned aerial vehicle, supporting European Aeronautic, Defence & Space Co. (EADS) in its attempt to compete in a market now dominated by Israeli and U.S. companies.

“There is a desire to explore development of a European drone,” Schmidt said in an interview in Berlin. “A European drone solution has to have more capability than current U.S. systems to make sense,” such as enhanced communications so spy drones can safely fly in civil airspace with airliners, he said.

A Franco-German drone agreement would come about two years after France committed to working closely with the U.K. on unmanned aircraft programs. That pact saw BAE Systems Plc and Dassault Aviation SA join up to develop a system, in a move that sidelined EADS, the parent of Airbus SAS. 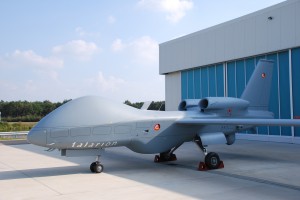 EADS said last year that it wasn’t continuing with its own Talarion drone after failing to win government funding.

Although France and the U.K. have moved forward with BAE and Dassault on designing a futuristic combat drone, progress on the 1 billion euros ($1.33 billion) Telemos surveillance system stalled after Francois Hollande came to power last year.

The French government is undertaking a strategic review of its defense needs, and Le Drian, the defense minister, said in May that he’ll “go back to square one” on plans to build military drones.

The French and German air force now operate similar unmanned spy planes in Afghanistan, based on Israel Aerospace Industries Ltd.’s Heron drone. Both are exploring what bridging options need to be pursued before a European model is ready around the end of the decade.