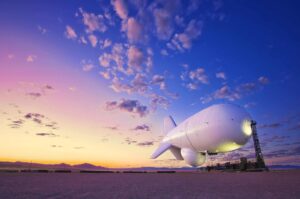 Swarming boats operating in highly-trafficked strategic waterways will soon be easier to detect, target and engage. During a recent test, a Raytheon Company, JLENS simultaneously detected and tracked double-digit swarming boats, hundreds of cars and trucks, non-swarming boats and manned and unmanned aircraft.

The swarming boats, similar to swarming boats in the inventories of hostile navies in high-threat regions of the globe, simulated a real-world scenario with a series of tactical maneuvers at low and high speeds. The aircraft and other vehicles JLENS tracked were similar to the other kinds of systems that might operate in the vicinity of busy vital waterways.

“This test proved JLENS can help keep important chokepoints free from the growing threat of swarming boats by detecting them from hundreds of miles away in a congested environment, enabling commanders to take appropriate action,” said David Gulla, vice president of Global Integrated Sensors for Raytheon’s Integrated Defense Systems business. “This success, which comes on the heels of a JLENS-enabled intercept of an anti-ship cruise missile, demonstrates that JLENS is ready to deploy for a Combatant Commander operational evaluation.”

A JLENS system, referred to as an orbit, consists of two tethered, 74-meter aerostats connected to mobile mooring stations and a communications and processing group.