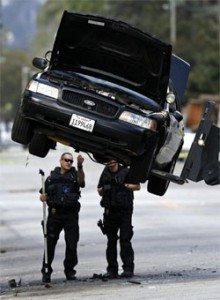 After several anonymous 911 calls, the Los Angeles Police Department responded to a bomb threat outside Los Angeles’ oldest Jewish temple. The caller warned of a bomb planted inside an empty police patrol car parked in the area to deter crime. As bomb squad officers arrived on the scene, so did their big guns: the automated BatCat Telehandler and another (non-ASI) bomb inspection robot. The two robots were used to lift the vehicle, break windows, blow the trunk lock, and provide remote surveillance to determine if the vehicle was safe for police officers and bomb-sniffing dogs to approach.

Dangerous circumstances, like this December 18th incident, happen every day throughout the world, and police officers risk their lives every day to protect the people in their communities. In many instances, officers are asked to investigate bomb threats, enter dangerous buildings, and face risky unknowns with little to no knowledge or support.

Companies like Autonomous Solutions, Inc. (ASI) are well aware of the dangers faced by these highly trained professionals and have created solutions that are designed to help officers investigate and neutralize dangers while keeping at safe distances. Vehicle automation technologies, such as those found in the LAPD BatCat (Bomb Assessment Tactical Counter Assault Tool), have many applications in many industries, but few applications create more beneficial results than keeping police and military personnel out of harm’s way.

In another incident in April 2011, a LAPD officer lay in critical condition after a deranged gunman shot the him in the jaw and shoulder. The gunman then barricaded himself inside his home initiating a standoff that lasted until the LAPD used the BatCat to robotically tear down the walls of the home and inspect the area with a camera. The gunman was confirmed dead by the BatCat camera, presumably from gunshot wounds sustained in the firefight with police. By using vehicle automation technology, the LAPD was able to bring this standoff to a safe ending without attempting a risky entry into a home controlled by a man that had already seriously wounded one officer.

Even though the incident near LA’s Wilshire Boulevard Temple was deemed a hoax, this incident, the Sylmar standoff, and others highlight just how useful vehicle automation can be in keeping officers at safe distances while still providing the tools necessary for them to effectively protect the communities they serve.