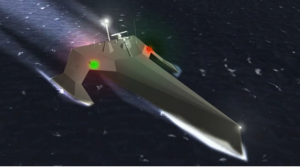 Science Applications International Corporation (SAIC) has announced that it has been awarded a prime contract by the Defense Advanced Research Projects Agency (DARPA) for the Anti-Submarine Warfare (ASW) Continuous Trail Unmanned Vessel (ACTUV) program phases two through four to design, build and test a new prototype unmanned autonomous surface vessel. The single-award, cost-plus fixed-fee (CPFF) contract has a three-year period of performance for phases two and three with a total contract value of approximately $58 million, and a $1 million eighteen-month option for phase four.

The DARPA ACTUV program aims to develop an unmanned autonomous surface vessel with the ability to track a quiet diesel-electric submarine overtly for months over thousands of kilometers, with minimal human input. SAIC provided conceptual design services in phase one of the program, creating an innovative wave piercing trimaran solution.

Under the contract, SAIC will provide a final design and production plan for the ACTUV prototype in phase two, construction of the prototype is scheduled to be completed in phase three, and government testing in phase four. Leveraging the company’s phase one concept design as the point of departure, SAIC will work with DARPA to design, build, and demonstrate an experimental vessel capable of independently deploying under sparse remote supervisory control, to achieve a game-changing ASW operational capability, with the ultimate objective to facilitate rapid transition of that capability to the Navy in response to critical operational demand.

“We are very pleased that DARPA has selected SAIC to realize its vision for this revolutionary unmanned autonomous vessel that has the potential to be a game-changer in ASW and maritime operations,” said John Fratamico, SAIC senior vice president and business unit general manager.