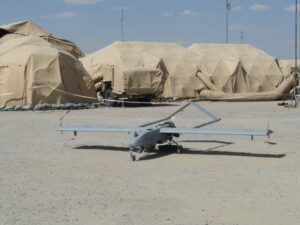 The Shadow Tactical UAS is being used in the research

In one of its latest research projects, the U.S. Army Research Laboratory is investigating thermoelectric properties of materials on the Shadow Tactical Unmanned Aerial System, and techniques that could convert heat into energy.

The Shadow Unmanned Aerial System, or UAS, is used by the Army and Marine Corps for reconnaissance, surveillance, target acquisition and battle damage assessment.

The special effect they are leveraging is called “thermoelectric power generation,” and researchers are relying on a unique effect that produces electric energy between hot and cold temperatures, like on one side of a device — a tailpipe which easily can climb past 2,000 °F — that meets with frigid flowing air at high altitudes above ground.

It’s wasted energy that U.S. Army Research Laboratory, or ARL, researchers are looking to harness, package and shrink in hopes it could one day lead to Soldier-worn power sources converted from body heat and cool ambient air, or reduce the size of a vehicle alternator.

This work, like similar research throughout ARL, is expected to gain defense department attention because of its promising early signs to increase efficiency and improve fuel utilization, especially given constraints in energy budgets imposed on micro scale systems, said John Gerdes, mechanical engineer with the Technology Development and Transition Team of ARL’s Vehicle Technology Directorate.

“Perhaps if the technology is advanced in later years, it will be possible to extend flight times, increase available mission scope and add additional sensors or payloads,” he said.

Earlier this year, ARL teamed with Research Triangle Institute International, General Dynamics Land Systems and Creare, Inc., to demonstrate a prototype robust energy harvesting solution that converts residual thermal energy from an M1 Abrams tank exhaust into useable electric power. The waste heat recovery system captures heat from the exhaust of the turbine engine, converts this heat into electrical power with a thermoelectric generator, and dissipates the heat through a heat-rejection system.

A report of that effort revealed that the prototype waste heat recovery system, once scaled up, could be retrofitted to existing tanks without requiring any modification to the engine or powertrain. A small-scale demonstration of more than 80 watts of power from the exhaust heat of an M1 Abrams tank set the stage for developing a full-scale system to recover waste heat from the vehicle.

Patrick Taylor and Jay Maddux, of the Sensors and Electron Devices Directorate’s, or SEDD’s, Electro Optic Materials and Devices Branch at ARL, recently co-authored a report stating that although the efficiency of thermoelectric power generation is generally considered low, there are many military needs for electrical power that thermoelectric technologies can uniquely and successfully address.

“As a matter of fact, applying thermoelectric power generators along the exhaust train of the Shadow will also reduce its infrared signature, and therefore reduce its detect-ability from adversaries,” he continued.

Lauren Boteler, also with SEDD, teamed on this effort to develop advanced packaging technologies required for successful integration with the Shadow.

ARL’s unmanned aerial vehicle, or UAV, study began as a first principles analysis that looked at the total energy available in the fuel, and made certain assumptions about how much was used in generating power and how much was lost as waste heat.

“This means that we will consider factors like the match between a given device and the expected operational environment, the cost of the device, potential energy savings, the mass and volume of the device, and other more practical considerations that don’t matter as much in a lab but matter a lot in the real world,” he explained.

“Many of the potential uses for mounted/dismounted power, such as recharging batteries, are therefore ideal for thermoelectric technologies. However, these applications will require interconnected, smaller-scale modular devices than are currently available. Most commercial-off-the shelf thermoelectric devices are optimized for cooling, not for generating power, so new device structures with materials and geometries better optimized for power generation are needed for broader use of thermoelectric technologies,” said Gerdes.

He said taking a systems engineering approach to solving a problem is nothing new, but ARL’s focus is on developing an application specific approach that may be useful in showing where thermoelectric devices could be placed, especially in areas that might not be obvious.

“Hopefully our work will illuminate some kind of a procedure for determining how best to match a given thermoelectric device to an application with some kind of general framework that may be applied to future unknown combinations of missions and such devices,” said Gerdes.