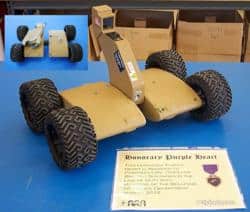 In a SWAT operation that concluded with the suspect in custody, a Pointman Tactical Robot was struck with four rounds from a 12 gauge shotgun at close range. Prior to being disabled, the Robot was able to monitor a key exitway for multiple hours, plus relay the position and disposition of the suspect to SWAT officers staged further away. Though the robot was disabled after being fired upon, it did survive the event and has been delivered fully repaired to its owners in Bellevue, Neb.

“Had we not deployed the Pointman Robot there is a good chance we would have had SWAT officers much closer to that doorway and possibly in harm’s way,” said Dave Stukenholtz, Criminal Investigations Bureau Commander for Bellevue Police Department.
Repairs were completed in less than a month and the robot was shipped back to Bellevue on Thursday, Oct. 11 to resume its SWAT responsibilities.

“It did its job,” said Bob Quinn, leader of Applied Research Associates (ARA) Unmanned and Security Products Division. “Anytime a robot is shot, it’s an example of keeping an officer out of the line of fire. Not only did the robot keep SWAT officers informed of suspect activity, but it’s rugged enough that even after four rounds at close range, it’s fixable and quickly ready to rejoin the team in Nebraska.”

The Pointman, a compact, highly mobile reconnaissance robot is an ideal tool for first responders including SWAT and Bomb Teams. Pointman is currently fielded with law enforcement agencies across the US, and has been supplied to Department of Defense units as well.