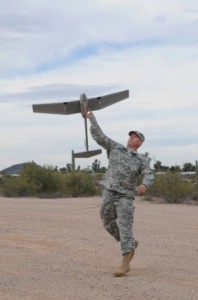 Soldier’s safety in combat zones is a top priority for the Army, and state-of-the-art technology is often used to minimize the risk. One such technological aid is the small unmanned aerial vehicle known as the Raven.

At the helm of the small battery-powered remotely control air craft are dozens of Army Reserve military police teams assigned to the 200th Military Police Command.

“This is excellent training,” said Brig. Gen. Scottie D. Carpenter, commander of the 11th Military Police Brigade. “They’re out here with all their equipment using it like they would be using it in a real combat environment.”

In operations, remote-controlled unmanned aircraft systems, or UAS, have played a huge role by relaying real-time visual battlefield information to assist commanders in making their decisions, without sending pilots or Soldiers into danger.

The Raven is a small, hand-launched UAS capable of traveling up to 10 miles, and transmits both images and video in real time. It only requires one person to launch and a two-person team to operate.

“It’s packed into two parts so the two-man team can carry it anywhere on their backs,” said Staff Sgt. Don Griffin, one of the company’s Raven team leaders. “Once it comes time to use the equipment, the team should be able to get the plane up and flying within five minutes.”

Griffin said it is important for the four-person team to conduct aerial operations with the Raven.

“We usually do hands-on training every three months and when we can’t we use our flight simulator to get our training time in. This helps us keep our skill up on flying and it gives us practice on specific skill like surveillance techniques,” said Griffin.

Flying the Raven is no easy task, with multiple features and controls; it takes a trained and certified Soldier to accomplish the task. Before they are able to fly the Raven, Soldiers must first go through a two-week course were they receive both hands-on instruction on the equipment and class time. Once a Soldier has mastered the controls, he or she can program the Raven to fly in a set path or control it manually.

The complexity of the system makes the training 56th MP Company Soldiers received that much more important according to Griffin.

“The training is important because when you have squads of Soldiers out in theater where it’s dangerous, we can launch these planes into the area that they can’t see instead of having to send them in without some type of intelligence,” said Griffin.

“I can definitely see the benefits and the positive effects this type of equipment would have out in the field,” he said.