UGVs (unmanned ground vehicles) – also known as land robots – are used for protection or rescue duties in hazardous environments, or for the performance of frequently reoccurring, repetitive tasks. The context can be military as well as a civilian. UGVs are typically deployed for reconnaissance work, monitoring buildings and infrastructures, border surveillance, search and rescue missions and goods transport, as well as explosive ordnance disposal and mine clearance. UGVs can be compared to unmanned airborne systems, except that ground deployment presents scientists and technicians with challenges that are several orders more complex and difficult.

RUAG Defence CEO Urs Breitmeier comments: “UGVs are a highly promising technology of the future, and one that RUAG is actively pursuing. RUAG is researching, developing and investing in this area with the aim of gradually becoming a UGV competence centre for the Swiss Army and other security forces.”

RUAG is attending this year’s M-ELROB, which is taking place in Switzerland for the first time, with two projects: 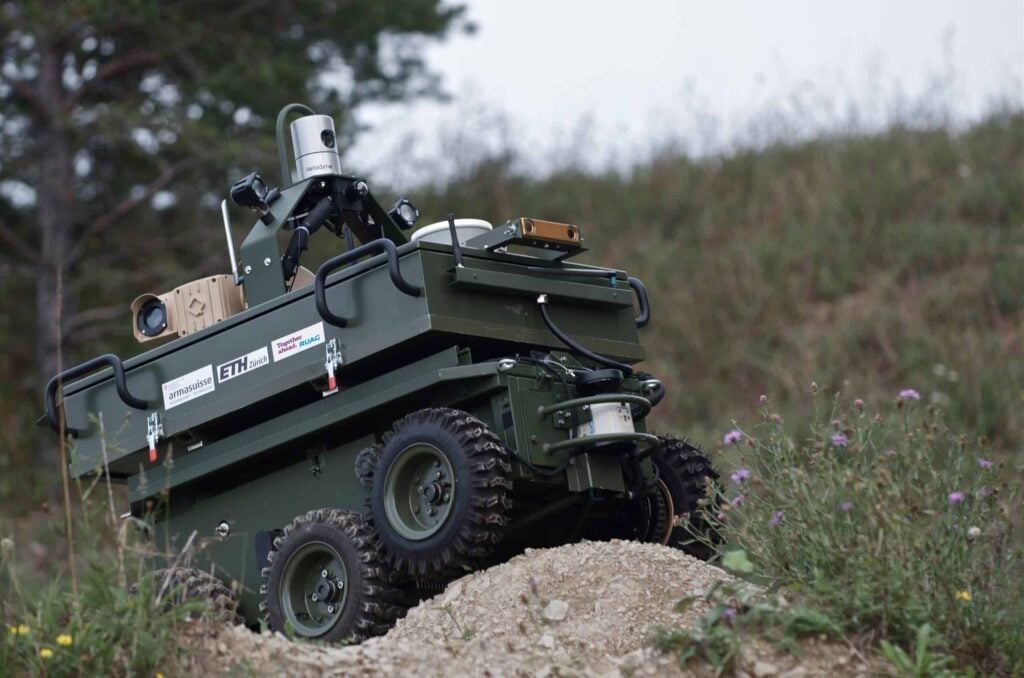 ARTOR is a research project involving a group of specialists from the Federal Institute of Technology Zurich (ETHZ), from technical departments at armasuisse, and RUAG. The objective of this project is to improve the autonomy of a ground vehicle. The point of the UGV research programme as a whole is the setting up of a UGV competence centre in Switzerland. The programme is primarily driven by Switzerland’s public safety and security requirements, not by the marketing possibilities presented by the technology.

ARTOR is already capable of navigating autonomously: rather than use GPS, it relies on data captured by sensors mounted on the vehicle. ARTOR is able to negotiate static and moving obstacles as its picks out the quickest way to its target via a number of via predetermined waypoints. It is also able to follow vehicles or people and can search for a route or area autonomously.

This project is a joint venture involving RUAG and General Dynamics European Land Systems (GDELS), and is aimed at developing a UGV technology demonstrator based on a standard military vehicle that is otherwise normally manned. In the partnership, GDELS is delivering the Eagle 4×4 vehicle with an all-important vehicle assistance system, while RUAG is responsible for integrating the additional equipment required for UGV operation, such as sensors, control computers (hardware and software), actuators, the broadband radio system and the control and command equipment for the control console. The vehicle is currently teleoperated, i.e. operated under remote control, but its autonomy will improve as development work progresses.

RUAG is developing and delivering most of the UGV component groups in kit form. The kit is designed in such a way that it can be used with almost any vehicle. In addition, the control console can be installed in a container or another vehicle. The vehicle can be operated in a manned or manned mode. It measures 5.5 m in length, 2.3 m in width and 2.4 m in height. Its maximum weight is 10,000 kg and it can carry a payload of around 3000 kg.