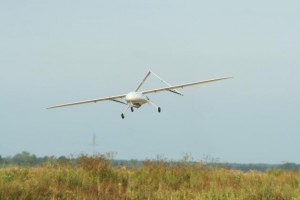 The Penguin B Unmanned Aircraft

Gill Sensors, a UK company widely regarded throughout the world as a leader in capacitive liquid level sensor technology, played a part in helping the UAV Factory team smash a world record for the longest recorded flight for a small-class unmanned aircraft. In July 2012, the “Penguin B” aircraft stayed in the air for 54½ hours, breaking the previous record by 43%. Gill Sensors’ input involved the development of an innovative fuel level sensor that enabled the accurate and reliable monitoring of the amount of remaining fuel in the 7.5 litre tank.

The main challenge encountered by the Gill Sensors team was the fact that space was extremely limited as the fuel tank was an irregular shape and there was no space to mount the sensor through the top of the tank, as would normally be the case. Engineers at Gill Sensors used their considerable expertise in the fuel sensor technology marketplace to design a unique sensor that could be mounted through the side wall of the tank. The final product comprised a Gill micro liquid level sensor with a specially angled probe to allow accurate monitoring of the tank depth and was supplied to UAV Factory pre-calibrated, ready to be installed in the fuel tank.

Key to the excellent performance and suitability of the Gill fuel sensor for this aviation application is the use of new microelectronics that offers a 50% space saving compared to standard electronics. Not only did this enable the space required to mount the sensor to be reduced, but also the overall weight of the sensor was only 60g, a significant reduction compared to other fuel level sensors and a key consideration for UAV manufacturers.

The micro sensors were supplied calibrated for 95 Octane Petroleum with a 2% full synthetic oil mix. With an operating temperature range from 40ºC to 125ºC, they are also environmentally sealed to IP68 and meet all the necessary requirements for humidity, vibration and EMC.

“We were delighted when we were told about this fantastic achievement by UAV Factory.” says Mike Rees, Head of Marketing at Gill Sensors. “Our design engineers relished the challenge when we first met UAV Factory at AUVSI’s Unmanned Systems conference in Washington in 2011, and were able to utilise the proven microelectronic level sensor technology that is currently supplied by Gill into other specialist applications such as Formula 1 race cars and military land vehicles. It was a great achievement for UAV Factory and we are proud to be a part.”