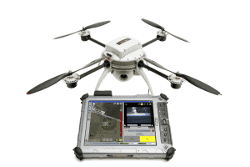 Aeryon Labs Inc. is pleased to announce the launch and immediate availability of an integrated GIS solution for its class-leading Aeryon Scout™ small UAS (Unmanned Aerial System). Partnering with the image processing experts at Pix4D, geo-tagged imagery from the Scout can be easily loaded into the Pix4UAV cloud service or desktop software to automatically produce a range of outputs such as 2D maps and 3D models with only a few clicks. This class-leading service is now available to purchase directly from Aeryon Labs.

The use of small unmanned systems such as the Aeryon Scout offer significant advantages over traditional image and data collection alternatives such as satellites, manned aircraft, or ground-based measurements. Imagery from satellites or manned aircraft is often out-of-date, and cost-prohibitive to aquire new imagery. They are also slower to respond when immediate imagery is required, particularly in remote locations. Both of these traditional methodologies are also less-accurate due to the higher speeds and altitudes at which they must travel.

“In terms of operating costs alone, use of manned aircraft such as helicopters for aerial surveys can cost several thousands of dollars per-hour “ said Dave Kroetsch, President of Aeryon Labs. “For about the same price, but for a month rather than an hour, the Scout is immediately available and can be used as many times as required to collect imagery and data throughout a project or crop growing season. This ability to reliably and repeatedly capture imagery is an incredible value-add for environmental, civil engineering, or mining projects – or other applications such as precision agriculture.”

As a Vertical Take-Off and Landing (VTOL) vehicle, the Scout can operate lower and slower than manned aircraft, and fly in confined environments where fixed-wing UAS cannot operate safely. The result of this capability is incredibly detailed imagery, up to 1cm/px resolution, required for precise modeling and measurement.

The Aeryon Scout’s combination of reliable operation in challenging real-world conditions, while providing an extremely easy-to-use touchscreen control interface with advanced automated features and failsafes, make it the platform of choice among small unmanned systems for professional applications. The Scout’s AutoGrid™ functionality creates an automated grid waypoint flight path based on survey parameters.

Unlike some other small UAS platforms, this grid can be flown automatically but can also be paused and resumed, edited or aborted, dynamically during flight. The Scout system also features automated failsafes, and provides the ability to easily change its automated landing location, should the operating environment change at any time.

Once aerial imagery has been collected from the Scout, images with embedded geo-reference (geotag) data are loaded into the Pix4UAV desktop or cloud service and provides immediate verification to the user by placing image locations on a map. Images are then automatically pre-processed to provide a detailed quality report including image quality and resolution – after which a variety of orthorectified imagery including 2D models, KML tiles, Digital Elevation and 3D models, can be selected and automatically generated. Pix4UAV’s dense matching capabilities allow the computation of a 3D position for virtually every pixel of an image.

The Pix4UAV software has already been used by Aeryon and its customers for significant applications, including assisting the US Coast Guard to map ice flows for an emergency fuel delivery mission to the remote community of Nome Alaska. In the Aleutian Islands, a team of researchers and biologists used 2D images to perform Stellar Sea Lion population and gender counts, and 3D terrain models to assess their habitat as part of an important NOAA wildlife study.

By adding an automated integrated image processing solution to the industry leading performance and ease-of-use synonymous with the Scout system, Aeryon Labs is able to provide its customers with a truly end-to-end solution for aerial mapping, modeling, and measurements. This solution is available to purchase immediately for existing and new customers. In addition to the integrated software options, imagery from the Scout is compatible with other industry standard GIS tools including those listed on the Aeryon website under GIS Solutions.