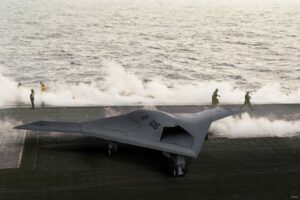 The UCAS-D program, based at the Naval Air Systems Command (NAVAIR) on Naval Air Station (NAS) Paxutent River, Md., is designed to demonstrate the ability for the unmanned, autonomous X47-B unmanned air vehicle (UAV) to launch from and land safely on an aircraft carrier.

“We are one of the first aircraft carriers in the fleet to have Navy UCAS-D equipment installed on board,” said Lt. Cmdr. Chad Young, Truman’s assistant air operations officer. “Its purpose is to communicate with the UCAS-D flight software on their unmanned aircraft.”

The tests aboard Truman ensured shipboard UCAS-D software was interfacing properly with the unmanned aircraft’s software using a surrogate aircraft, which was a contracted King Air.

“They are looking for confirmation that our systems are properly monitoring the unmanned surrogate aircraft,” said Young. “This testing will eventually lead to unmanned aircraft landing on and launching from U.S. Navy aircraft carriers.”

The software on board the King Air, an aircraft that is comparable to the Navy’s C-12 Huron, was modified to include an accurate representation of X-47B on-board systems.

“We’re refining the system,” said Lt. James Reynolds, UCAS-D surrogate project officer with Air Test and Evaluation Squadron 23 of NAS Patuxent River. “During last year’s tests on Ike, we found minor interfacing issues with the in-flight software aboard the Hornet, and have modified that software to be more similar to the software in the X-47B. The King Air has more room on board compared to the Hornet, so we were able to include a better model of UAV software and more accurately test the software.”

“The testing went well,” said Reynolds. “We accomplished all of our objectives and it was a very successful detachment. [The UAV] is certainly much closer to ready for prime time than it has been in the past.”

Testing a new aircraft, especially one which is unmanned, is a slow process, said Reynolds. Initial UAV testing was completed in 2002, followed by more testing aboard USS Abraham Lincoln (CVN 72) in 2005.

“This is what developmental flight testing is all about,” said Reynolds. “It’s the small steps that make the big evolutions happen.”

The UCAS-D program is scheduled to return to Truman for upcoming underway periods to conduct further tests.

“I think our effort makes the evolutionary steps necessary to arrive at a capability the Navy needs,” said Reynolds. “There are challenges, but we are doing what it takes to achieve our goal.”