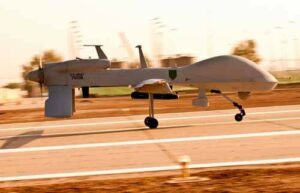 The U.S. Army is standing by its approach of continuing to fly, buy and upgrade its Gray Eagle drones notwithstanding software glitches encountered on the road to the program’s initial operational test and evaluation, which is scheduled to begin the first week of August at Fort Irwin, Calif.

The Army has been flying small numbers of the camera-equipped Predator equivalents in Afghanistan as a quick-reaction capability, and shows no signs of slowing down on the program. In March, the service added the first complete company of 12 aircraft, and in June, the Pentagon gave the go-ahead for the Army to buy 29 more of the planes from General Atomics Aeronautical Systems, which also builds the Predators. The IOT&E was delayed by a March 2011 Gray Eagle crash during testing. Successful completion would be a step toward full-rate production.

The Army has taken heat in the blogosphere for buying more of the planes despite a track record of software problems with them.

Maj. Gen. William “Tim” Crosby defended the decision to press ahead as a deliberate strategy that was fully vetted with the Office of the Secretary of Defense and the defense acquisition board that oversees major programs.

“Crosby’s not just out drinking his own Kool-Aid,” he told C4ISR Journal in an interview. “We took this all the way up the chain and asked for specific guidance.”

One choice was to stop adding new capabilities for fear they could lead to new software glitches. That would give the Army and its contractors time to focus on improving the reliability of the software that runs the aircraft’s sensors and electronics. The second option was to “worry about the reliability later” and press ahead with new capabilities. Those capabilities will include a synthetic aperture radar/ground moving target indicator sensor and a data relay system. “Option two” — pressing ahead — “was the one they chose,” he said.

“If we weren’t meeting what the war fighter wanted, we would stop and say let’s address this and fix it now. But the war fighter says, ‘Hey man, this thing is really, really good,’Ÿ” Crosby said.

The Gray Eagle has been flying combat missions since its initial deployment to Iraq in 2009, when a four-aircraft platoon of Gray Eagles acted as a quick-reaction force. A second platoon of four aircraft was deployed to Afghanistan in late 2010.

The company of 12 Gray Eagles has been flying three to five missions a day since April, giving soldiers 70 to 90 hours of coverage each day while maintaining an operational availability of about 85 percent, according to Col. Tim Baxter, the Army’s unmanned aerial systems project manager.

The majority of the technical problems the Army has identified are software-related, and those issues are primarily due to the constant upgrades of new packages. Each time a new capability is added, it introduces the potential for new problems. But those problems are then fixed with the next upgrade.

“We’re not seeing those failures again and again for things that we’ve fixed, but new failures are introduced when we put new software in place,” said the Army’s Rich Kretzschmar, deputy project manager for unmanned aircraft,

Baxter said the Gray Eagle effort is “a contingency-based program. We’ve been putting kits in the field while simultaneously in the background developing the system as part of a program of record.”

The Gray Eagle is also a big part of the Army’s future battlefield network, the Warfighter Information Network-Tactical, which is being deployed to Afghanistan with two brigade combat teams this fall. WIN-T Increment 3 will begin limited user tests in fiscal 2015, using the Gray Eagle as an aerial node to allow soldiers to forgo satellite communications while taking advantage of the aircraft’s long loiter time.

The Army recently received the network “pod” from General Dynamics that is being used for some initial system integration lab work, according to Jeff Crabb, the Army’s deputy project manager for medium-altitude endurance unmanned aircraft.

The Army is still trying to decide how best to integrate this capability into Gray Eagle companies, but Crabb said early assessments point to three WIN-T payloads per company. WIN-T would still be able to conduct other missions, he said.

“The idea is that we could do an ISR-type mission at the same time we’re providing relay because most of the time, we’re supporting the brigade combat teams, and those are the same guys we would probably be providing communications relay for,” Crabb said.

This summer’s evaluation will test a small tactical radar/ground moving target indicator payload, as well as continue the manned-unmanned teaming program with Apache attack helicopters. The tests will allow Apache pilots to control the UAS’s electro-optical/infrared payload, see video and control the flight path of the Gray Eagle.