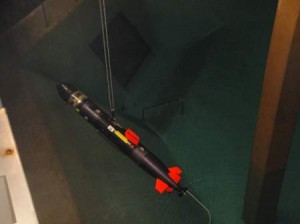 In a mission lasting almost seven hours, an autonomous underwater vehicle made by ATLAS ELEKTRONIK, Germany, dived through a water supply tunnel 24 kilometres long and a diameter von 2.25 metres in the vicinity of Stuttgart, Germany, successfully investigating the tube for damage. With this survey on 6 March 2012, it at last became possible to inspect the “Albstollen” tunnel in the State of Baden-Württemberg for the first time after 40 years of operation.

ATLAS ELEKTRONIK was asked to inspect the water tunnel by means of an autonomous diving robot. For the challenging task, the SeaCat AUV had been selected due to its size and the ability to operate either remotely controlled or fully autonomously. After a thorough disinfection, the vehicle was lowered into the inflow reservoir at Büttnau and guided into the tunnel by remote control. For the first 300 metres, the SeaCat was controlled through a laptop via a fibre-optic cable. After the vehicle had passed several obstacles in the first section, the cable was cut and the autonomous guidance system was activated to take control for the next 7 hours and 24 kilometres. The speed was about a metre per second, corresponding about 2 knots or 3.6 km/h.

The SeaCat Team of ATLAS designed a specific inspection head that allows recording high-resolution video data over the total length of the tunnel, while moving continuously through the tunnel at a speed of about 2 knots and remaining centred with the aid of optical distance sensors.

The exit point of the trip after 24 kilometres was the shaft surge chamber at Talheim, a concrete structure comprising a shaft 38 metres deep and about 8 metres in diameter. This pressure-balancing well is normally half-filled with water. The water tunnel is routed through the well, forming a semi-circular channel at the bottom. A diver’s lamp was positioned at this point to provide a light indicating that the AUV had reached its final destination. This visual signal was detected by the vehicle, causing the autonomous guidance system to stop the vehicle and let it rise to the surface.

The “Albstollen” tunnel forms part of the water supply system operated by Bodensee-Wasserversorgung (BWV) with headquarters in Stuttgart. As the largest German long-distance water distribution systems, it provides fresh water from Lake Constance to four million people in 320 communities. As one of two main lines, the Albstollen passes through the Swabian Jura range to supply Stuttgart and the northern part of Baden-Württemberg.

Although the concrete duct had been checked regularly in the course of its over 40-year lifetime through measurements of the hydraulic friction losses and through the leakage rate, a visual inspection of its condition over the entire length had not been technically possible until now.

The SeaCat is an underwater vehicle about 2.5m in length and 30cm in diameter. Being a hybrid vehicle, it can be operated either remotely controlled or fully autonomously with an endurance of up to 8 hours and a range of 40 km. Video cameras and a variety of sonar can be carried as payload sensors. Typical areas of application include the inspection and mapping of inshore lakes, coastal sea areas, harbours, and marine structures such as dams or the foundations of wind turbines. The vehicle is available at ATLAS HYDROGRAPHIC, a subsidiary of ATLAS ELEKTRONIK and a leading manufacturer of hydrographic survey systems.