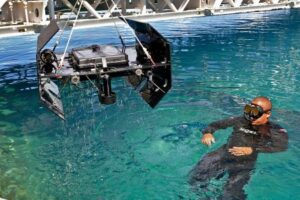 Teams from around the world gathered at the Space and Naval Warfare Systems Center Pacific for the 15th annual RoboSub Competition, co-hosted by the Office of Naval Research and the Association for Unmanned Vehicle Systems International Foundation, July 17-22, at SSC Pacific’s Transducer Evaluation Center (TRANSDEC) facility.

Capt. Joe Beel, commanding officer of SSC Pacific, welcomed the students and expressed the importance of unmanned systems for warfighters.

SSC Pacific is the Navy’s Information Dominance Command and provides command, control, communications, computers, intelligence, reconnaissance, and surveillance capabilities at home and abroad. Beel noted that the Center was an ideal site to host such a competition, as the Command has a history of reaching out and exciting younger generations of scientists and engineers about science, technology, engineering, and math.

“The goal of the RoboSub Competition is to challenge a new generation of engineers to design and build autonomous underwater vehicles [AUVs], capable of performing realistic missions in the underwater environment and to foster ties between young engineers and the organizations developing AUV technologies,” said Daryl Davidson, the executive director of the AUVSI Foundation.

A common theme throughout the competition was collaboration, with teams appreciative of the opportunity to learn and work with students from other colleges and countries.

“We are all robot lovers, so it’s great to have the opportunity to compare notes and learn something new from the other teams,” said an engineering student from Harbin Engineering University in China.

This year, the competition had the flair of an ancient Roman contest. The arena was divided into a practice area and a competition area. Each team was provided time to prepare their vehicle for submersion into the water and a “competition time” to complete the mission.

The competition required that each AUV pass through the validation gate; commence in training (dock/release buoys); pass over an obstacle course (maneuver through polyvinyl pipe); enter the gladiator ring (drop markers); Et tu, Brute? (shoot torpedoes through a cutout); feed grapes to the emperor (manipulate a cylinder); collect the Laurel wreath, and crown the emperor (find a pinger, grab an object and move/ release the object). The vehicle had to perform the entire mission autonomously, without any communication or control from a person or off-board computer.

SSC Pacific’s TRANSDEC pool, a one-of-a-kind facility, was an impressive site for the competition. The pool is filled with six million gallons of water, has a depth of 38 feet at the deepest point, and is 300 feet by 200 feet in size. The structure of the pool simulates vast underwater expanses, is designed to eliminate all extraneous man-made or natural biologic noises, and permits precise control of surface and underwater conditions.

This year, Cornell University won top honors, taking first place in the RoboSub Competition. The Cornell University Autonomous Underwater Vehicle team designs and builds AUVs for competition and research. Their primary annual objective is the AUVSI Foundation’s RoboSub Competition. CUAUV has placed in the top ten every year and won the overall competition five times.
A new component to the RoboSub competition this year was the introduction of the SeaPerch Challenge, a one-day competition, which incorporates middle and high school students into an innovative robotics program.

SeaPerch is a program managed through the AUVSI Foundation; it equips teachers and students with the resources they need to build an underwater Remotely Operated Vehicle in an in-school or out-of-school setting. Students build the Remotely Operated Vehicle from a kit comprised of low-cost, easily accessible parts, following a curriculum that teaches basic engineering and science concepts.

Susan Nelson, the executive director of SeaPerch, describes the program as the “yellow brick road to robotics,” providing an introductory program to excite students in the hopes they will continue to move forward within this field, advancing to the international RoboSub Competition, and eventually into a STEM career field.

“There is a real need for STEM awareness and promotion throughout our country and these competitions feed into that,” said Davidson. “The technologies that are placed into these submersible vehicles will transfer to everything from ground vehicles, aircraft and space. What we do here is important to the Navy.”