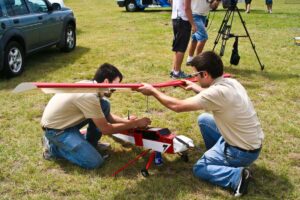 Boeing is encouraging the next generation of engineers and scientists to think innovatively about aerospace during this year’s unmanned airborne vehicle (UAV) Outback Challenge. The competition will be held during October in Kingaroy, Queensland.

“Boeing is a proud long-term supporter of the UAV Outback Challenge which inspires bright young minds to explore the significance of UAVs in Australia,” said Michael Edwards, general manager, BR&T-Australia. “The competition is an excellent opportunity to demonstrate the ability to safely operate unmanned aircraft across a range of civil applications.”

“The UAV Outback Challenge is a unique global competition with a very specific Australian flavour and Insitu Pacific is proud to support its ongoing growth and success,” said Andrew Duggan, managing director, Insitu Pacific. “Australia is leading the world by offering such a robust competition that focuses on relevant real-world scenarios for unmanned aircraft in remote search and rescue, backed by the full support of the Civil Aviation Safety Authority (CASA).

“Our students and young engineers are able to work closely with the UAV industry and CASA to learn first-hand about the challenges of building and operating a UAV. It positions Australia very well for future growth in the commercial unmanned aircraft domain,” said Mr Duggan.

The UAV Challenge is a joint initiative between the ARCAA (a partnership between QUT and CSIRO), Aviation Development Australia Limited and AUVS-Australia.

BR&T-Australia and Insitu Pacific are working on a number of projects utilising unmanned aircraft for civil applications. Insitu Pacific has been working with Murdoch University to deploy its ScanEagle UAV for marine mammal monitoring off the coast of Western Australia and Queensland and with the Queensland Government on weed monitoring in Far North Queensland. BR&T-Australia and Insitu Pacific are both partners in Project ResQu, announced in June, to investigate the technologies needed to safely and rapidly deploy unmanned aircraft in shared airspace for a range of civil uses, including disaster search and rescue.