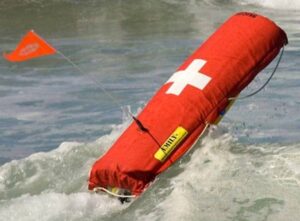 The next time someone is trapped in a rain-swollen wash on the northwest side, EMILY might come to the rescue.

EMILY — which stands for EMergency Integrated Lifesaving LanYard — is an unmanned, remote-controlled watercraft developed by Sahuarita-based Hydronalix Inc. as a way to help first responders like lifeguards and water-rescue teams reach people in distress.

Today, Hydronalix presented an EMILY to the Northwest Fire District for use in swift-water rescues.

The idea is that swift-water rescue crews can launch EMILY into a running wash and use it to reach victims with a rescue line, Hydronalix vice president Rori Marston said as the EMILY unit was delivered at Northwest Fire’s Station No. 38.

The other EMILYs delivered under the grant include one delivered earlier to the Green Valley Fire District, two each with lifeguard departments in Los Angeles and San Diego and one at Depoe Bay, Ore.