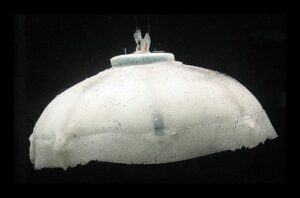 Researchers at Virginia Tech, the Univ. of Texas at Dallas and several other schools are working together to develop robotic jellyfish powered by sea water.

The “Robojelly” mimic the movement of jellyfish, using a combination of oxygen and hydrogen gases to contract its “muscles,” or “nano-platinum catalyst-coated multi-wall carbon nanotube sheets, wrapped on the surface of nickel—titanium shape memory alloy,” according to an abstract published in the April issue of Smart Materials and Structures.
“To our knowledge, this is the first successful powering of an underwater robot using external hydrogen as a fuel source,” Yonas Tadesse, one of the projects lead researchers, told the BBC.

Like jellyfish, the robot “uses its circular muscles in the inside of its umbrella-like bell to move,” Ankita Mehta wrote in the International Business Times. “When the muscles contract, the bell closes in and throws out water to push itself foreword. When they relax, the bell regains its original shape.”

The U.S. Navy’s Office of Naval Research is funding the development of the vehicle, and scientists hope the Robojelly could eventually be used for underwater rescue operations.
Alex Villanueva, a researcher at Virginia Tech, said the unmanned underwater will be used for “surveillance purposes,” but their findings could have a “broad range of applications for both military and civilian uses.”