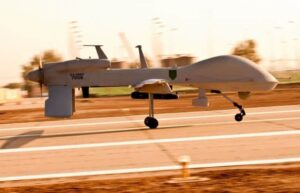 The Gray Eagle UAV used by the US Army

The Army is upgrading its fleet of MQ-1C Gray Eagle Unmanned Aircraft Systems while also advancing plans to equip each 10-15,000 Soldier division with its reconnaissance, surveillance, targeting and acquisition capabilities, officials said.

“The feedback we’ve gotten from our warfighters down range is that this system is a game changer. It is really enhancing our ability,” said Maj. Gen. Tim Crosby, with Program Executive Officer – Aviation. “Soldiers have been able to take this great technology and put it into the war quickly with great results.”

At a recent Defense Acquisition Board, Pentagon officials approved an Army plan to acquire 29 more aircraft as part of a longer term plan to equip each division with a Gray Eagle company consisting of a full-spectrum Combat Aviation Brigade of 12 aircraft, Crosby explained.

“The world will continue to be a dangerous place. Having that organic reconnaissance, surveillance, and target acquisition, or RSTA, capability at the division level will be a real asset,” said Rich Kretzschmar, Unmanned Aircraft Systems, or UAS, deputy project manager.

The Gray Eagle is a Hellfire missile-equipped, 3,600-pound UAS with a 56-foot wingspan and the ability to fly and send back images and sensor data for nearly 24 hours at altitudes up to 25,000 feet. Two Quick Reaction Capabilities units, each consisting of four aircraft, ground control stations and supporting equipment, are currently deployed in Afghanistan.

Additionally, a Gray Eagle company of 12 aircraft is serving in Afghanistan. Overall, the Gray Eagle has flown more than 24,000 combat hours and maintained an operational availability at about 85 percent, said Col. Tim Baxter, UAS project manager.

The Gray Eagle “quick reaction capability,” or QRCs, represents an effort to send emerging technology to theater as a way to refine requirements for an acquisition program, upgrade the sensors and software and provide Soldiers the battlefield advantage of utilizing its technology, all while simultaneously preserving the Milestones, checks, balances and procedures central to a formal Program of Record procurement effort, officials explained.

“This is a contingency based program. We’ve been putting kits in the field while simultaneously in the background developing the system as part of a Program of Record. This has been an iterative process,” said Baxter. “We added additional avionics and we added a [communications] relay capability. We have a laundry list of 15 to 25 things that we have added over the last three or four years. Right now in theater, Gray Eagles are flying 70 to 90 hours a day.”

Part of the rationale for the QRC is to harness key input and feedback from Soldiers using the system as a way to improve the aircraft, and in some instances, help add new capability. Gray Eagles QRCs have been operating in theater since 2009, according to Crosby and Baxter.

“This program has been such a success because this is one of those non-traditional acquisition programs. We have been growing this capability in the hands of Soldiers since its inception. We started out with some prototypes and we put some out there in the theater and started learning,” noted Crosby. “We’ve continued to learn. We get feedback from the Soldiers as we go and the system has done so well that we keep adding stuff. We have been focused on giving warfighter capability.”

Along these lines, further planned upgrades to the Gray Eagle system involve the addition of a Synthetic Aperture Radar, or SAR, Ground Moving Target Indicator, known as GMTI, sensor and an Air Data Relay, or ADR, capability. Kretzschmar explained that ADR capability gives Soldiers and UAS operators the ability to pass information from one air vehicle to another from a ground-control station.

“If you don’t have a line-of-sight connection and you want to extend your range, Air Data-Relay gives you that ability,” said Kretzschmar.

Air Data Relay is expected to prove extremely useful in the mountainous regions of Afghanistan, where obtaining line-of-sight connections can prove to be more difficult, he added.

Plans to improve Gray Eagle capability are the latest in a series of upgrades to the system taking place over the last several years, Crosby said. Each time the sensors are upgraded, new software is integrated into the system as well.

“When we first put this system in theater, it was just a Gray Eagle with an EO/IR, or Electro-Optical/Infrared, sensor. Then we put missiles on it. Now we are going to put SAR GMTI on it and we are going to put Air Data Relay on it. These are combat capabilities that our warfighters are calling for,” Crosby said.

The Gray Eagle acquisition program is preparing for a formal Initial Operational Test and Evaluation, also known as IOT&E, later this summer. During the IOT&E, it will formally demonstrate its capabilities while working in tandem with the Army’s Block III Apache attack helicopter.

The Gray Eagle is capable of what is called Level IV Manned-Unmanned Teaming, a technological advance in which helicopter pilots not only have the ability to view live feeds from a nearby UAS in real time, but also have the ability to fly the UAS and control the sensor payload.