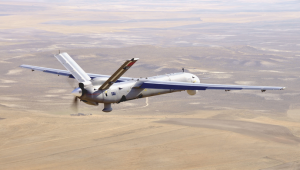 The Turkish Aerospace Industries (TAI) is preparing to showcase its Anka, the national unmanned air vehicle (UAV), and T-129, the national attack helicopter developed in cooperation with Italians, at a ceremony on June 28. The ceremony will take place on the anniversary of the approval of the law on the foundation of the company in 1984.

Prime Minister Recep Tayyip Erdoğan is scheduled to observe the vehicles – as well as the Hürkuş, the first national aircraft – during the showcase, but all depends on Erdoğan’s program, according to sources speaking to the Daily News.

Anka is the first national Medium Altitude Long Endurance (MALE Type) UAV that Turkeyhas produced so far. Its roll out ceremony was held two years ago, although Erdoğan missed that event. It made its maiden flight the same year.

Anka’s first prototype will fly in front of the public for the first time at this month’s event. Industrial sources indicate that most UAV projects experience many crashes before reaching a point where they can be demonstrated to the public, but this is a first prototype. The sources have concern for that show day as VIP’s electronic jammers may interfere with the UAV.

The TAI has started the production of 10 Ankas for the armed forces. The first Anka is able to reach an altitude of 20,000 feet, and there are new development projects ongoing to increase this altitude.

The UAV will be tested in the southeastern province of Batman before the
handover process for armed forces start.

The T-129 is the first Turkish Italian helicopter, based on the Italian AgustaWestland A-129. It has new engines new electronic suits. The T-129 started its test flight August 2011 and is now ready to be delivered to the Turkish Armed Forces.

The T-129 has two versions. The T-129A “combat support” version is the one that will fly in front of the public at the ceremony. It has the capacity to carry 500 ea 20 mm gun rounds and up to 76 guided or unguided 2.75 rockets.

Hürkuş, a pilot trainer plane, will be demonstrated to the public for the first time at the event. The plane will be ready to fly within a year and will also be shown to the audience at the Farnborough International Air Show.