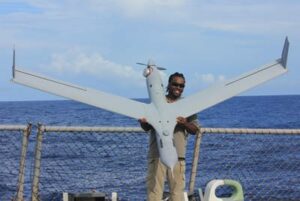 “We are honored to provide our global customers with more than 600,000 combat flight hours,” said Insitu President and CEO Steve Morrow. “We recognize that the experience of operating with our customer in challenging environments matters.”

Insitu takes lessons learned from the field and relays them to engineers and program managers. As a result, cost-effective, game-changing technology enhancements are fielded rapidly without interruption in service.

ScanEagle is modular-it can be reconfigured in the field to suit the mission-so even earlier models can be updated for flight with today’s capability, including advancements that have dramatically improved imagery and exploitation; operational security; training; airspace safety; and reliability, maintainability and availability.

“It’s hard to articulate the meaning of 600,000 flight hours, so it might be easier to think about what it means to one aircraft,” said Morrow. “Our 513th production ScanEagle completed its first mission in the extreme combat environment of Iraq in April 2008. Since then, it has accrued more than 3,500 flight hours and is still deployed today.”

While 600,000 combat flight hours is a most noteworthy accomplishment, the fact that Insitu has produced 1,400 ScanEagle aircraft while maintaining a 99 percent mission-readiness rate in an extremely demanding wartime environment is virtually unparalleled.

“I don’t know if there is another government contractor team that has achieved this level of operational excellence,” said Insitu Senior Vice President ScanEagle Programs Curt Chesnutt.