draganfly-innovations-inc News By Caroline Rees / 15 May 2012 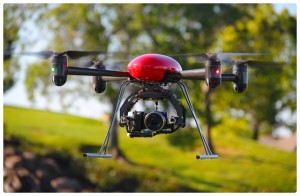 Draganfly Innovations Inc. has released the Draganflyer X4-P, the newest model in their series of well-engineered, miniature flying VTOL UAV’s. Designed for safe and stable commercial/industrial aerial videography and photography, the X4-P is the best grab-and-go solution for steady low altitude video and photos. Based on the design of the popular Draganflyer X8, the Draganflyer X4-P features incredible stability, a patented portable folding airframe, stabilized camera mount with vibration isolation, and increased flight time. Zenon Dragan, President of Draganfly Innovations Inc., says “The Draganflyer X4-P incorporates many of the technologies of our other high-end UAVs into a less expensive package and offers the longest flight time with increased payload.”

The Draganflyer X4-P is extremely lightweight and portable. The unique patented folding carbon fiber airframe fits inside a military-grade case the size of a suitcase. It can easily fit into the trunk or back seat of most cars, making transport a breeze. This gives the X4-P system the “all-in-one-box” flexibility to go anywhere at any time.

The Draganflyer X4-P incorporates safety and durability with high quality carbon fiber parts, innovative airframe design, and a sophisticated electronic flight stabilization system. Each flight battery includes an advanced integrated protection circuit that monitors the battery condition and status along with an easy to use battery life indicator. The X4-P features high intensity LED navigation lights for long distance and low-light flying, an “auto-landing” feature if the radio link to the helicopter is lost, and an onboard flight data recorder which stores telemetry and flight information on a removable memory card.

The camera mounting system on the Draganflyer X4-P offers enhanced vibration protection, isolating the camera from the helicopter, and features an active tilt function to keep the camera level in flight. This combination provides smooth, stable photographs and video.

The Draganflyer X4-P offers all of the standard features of previous Draganflyer systems. The advanced onboard flight computer system incorporates SteadyFlight software and processes the inputs from eleven individual sensors (including a barometric pressure sensor, three accelerometers, three gyroscopes, three magnetometers and a GPS receiver) to provide superior flight stability while maintaining a simple, easy–to-control experience for the user.

The Draganflyer X4-P is flown using a custom handheld controller with a 2.8” OLED touch screen displaying telemetry and flight data (GPS position, altitude, heading, bearing, helicopter battery voltage, and more). The controller features a built-in dual diversity video receiver that takes the streaming video transmitted from the helicopter and displays what the camera is seeing in real-time on a pair of video goggles.

The X4-P from Draganfly Innovations is a State-of-the-Art system designed, developed, and built from the ground up. All hardware, software, and systems development takes place in the company’s development/manufacturing facility so if any problems arise, Draganfly has the parts and in-house expertise to get the helicopter flying again. In contrast to many of the systems on the market today, Draganfly UAV’s display a level of professionalism few others can. Each Draganflyer is truly a work of art.