aerospherical-systems News By Caroline Rees / 23 May 2012 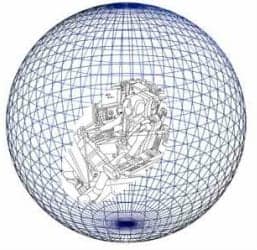 Aerospherical Systems has announced an aircraft design which is a perfect sphere. The flying orb is called an Aerosphere™. Until now, aeronautical flight vehicles have relied, almost exclusively, on a fixed-wing concept to elevate the aircraft and propel it through the atmosphere. One might comment that helicopters are the exception to this rule, but, as is well known, a helicopter utilizes a rotating fixed wing to generate the lift required to propel the aircraft.

A cursory examination of NASA’s websites and those of the USAF Research Laboratory reveals that while many concepts for new aircraft are under development, almost all of these rely on the fixed wing concept to generate lift. This information is readily available to the public, so one must assume that there may be other novel concepts under development that are clandestine in nature and, as such, not readily revealed to the public. However, it is safe to assume, given the general nature of aircraft design and development over the past sixty years that even these clandestine designs are also based on the fixed wing concept.

Aerospherical Systems has broken with this tradition and is currently developing a radically new concept for transportation, particularly drone and human-cargo aircraft that relies on the use of a sphere to generate the required lift and propel the spherical aircraft through the atmosphere (or water). This technology has been proven in battle since World War II in the “DamBuster” attacks on hitler’s dams, on every golf course on Earth (have you ever wondered why the golf ball has dimples and the clubs are angled) and in numerous NASA and Chinese Aerospace scientific studies; but no one has improved on it as dramatically as our design. The advantages of such a concept over that of the fixed wing concept are manifest. For example, by the very nature of the approach, the entire surface of the sphere is a lifting body, whereas in the fixed wing aircraft, the wings provide the predominant lift. As a result, the spherical aircraft could easily outperform any fixed wing aircraft, in terms of aerodynamics and efficiency.

NASA studies have verified the potential of our approach. Radar signatures can be “tricked” using a sphere design. These features would be directly scalable to any sized sphere. With the rise of interest in autonomous unmanned aircraft, the innate scalability of the spherical aircraft and its attendant capabilities makes this design concept highly desirable. An aircraft carrier could hold and launch many, many more of these types of craft than they now do with a fixed wing craft. A submarine could launch such a runway-free craft. Many other advantages exist.

Although Aerospherical Systems has developed the spherical aircraft concept to the point of feasibility, the firm now requires additional funding to build and test initial prototypes. Since the scientific and engineering basis for the concept has been clearly established, the firm believes that workable prototypes could be fabricated and tested within a year of initiation of a construction project.