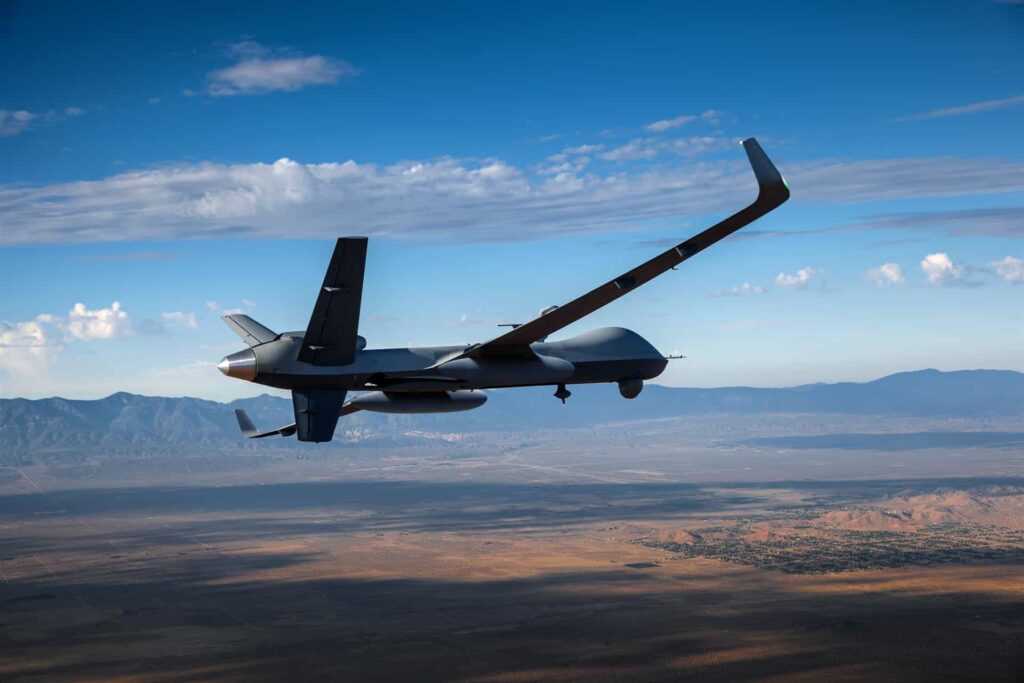 General Atomics Aeronautical Systems (GA-ASI) has successfully flown an MQ-9A UAS (unmanned aircraft system) north through Canadian airspace past the 78th parallel, proving the platform’s ability to fly in high-latitude environments. The aircraft was deployed in its “Big Wing” configuration, which features a 79-foot (24-metre) wingspan, an endurance of over 43 hours, top speeds of 220 KTAS, and a maximum altitude of 45,000 feet.

Many long-endurance UAS are unable to operate at extreme northern (and southern) latitudes, as many legacy SATCOM datalinks can become less reliable above the Arctic (or below the Antarctic) Circle – approximately 66 degrees north. At those latitudes, the low-look angle to geostationary Ku-band satellites begins to compromise the link. GA-ASI has demonstrated a new capability for effective ISR operations by performing a loiter at 78.31° North, using Inmarsat’s L-band Airborne ISR Service (LAISR).

The flight took place over Haig-Thomas Island, in the Canadian Arctic, and was conducted with cooperation from the Federal Aviation Administration, Transport Canada and Nav Canada. Covering 4,550 miles in 25.5 hours, it was one of the longest range flights ever flown by a company MQ-9. The flight was performed under an FAA Special Airworthiness Certificate and a Transport Canada Special Flight Operations Certificate.

GA-ASI partnered with Inmarsat Government in the design, acceptance testing and deployment of an enhanced satellite communications (SATCOM) system. The SATCOM was one of the key enablers of the flight and consisted of a GA-ASI designed L-band High Data Rate system, as well as an Inmarsat Low Data Rate backup datalink that could retain the aircraft’s link to the Ground Control Station even when operating in the high-latitude environment. GA-ASI coordinated between domestic and international airspace authorities for the flight, demonstrating how UAS can fly safely across international borders, in controlled airspace, and in this case, to extreme northern latitudes.

Linden Blue, CEO of GA-ASI, commented: “As the global leader in UAS, we have enabled our UAS to operate in Arctic regions, over land and sea, where effective C2 and ISR-data transfer was previously not feasible. As new customers come online, we want our aircraft to be able to provide them with the high data rate surveillance and high endurance that our aircraft are known for, and be able to do so in any environment.”

Tom Costello, Inmarsat Government’s Chief Commercial Officer, said: “At Inmarsat Government, we take pride in delivering SATCOM solutions that empower our customers’ current and future UAS missions around the world, even in the most challenging environments. We are proud to partner with organizations like GA-ASI that enable the government and military to enhance their use of UAS and deliver the SATCOM required for full situational awareness and mission success.”