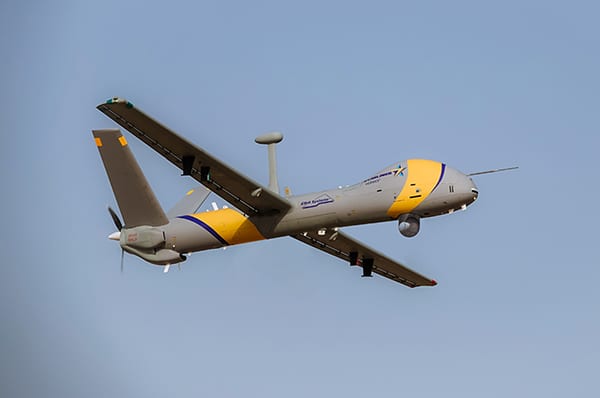 Elbit Systems’ Hermes StarLiner Unmanned Aircraft System (UAS) has been selected by Public Services and Procurement Canada, on behalf of Transport Canada, to provide support for maritime environmental protection missions in the Arctic and along the Canadian Eastern and Western coasts, as part of the Canadian National Aerial Surveillance Program.

The Hermes StarLiner UAS is a MALE (Medium Altitude Long Endurance) platform that weighs 1.6 tonnes and is powered by a heavy fuel engine. It utilises a range of commercial and unmanned aviation features that enable safe and fully certified integration into civilian airspace, including detect-and-avoid (DAA) systems, redundant data-links, a terrain avoidance warning system, automatic take-off and landing capabilities even in near zero visibility, de-icing and direct lightning strike sustainment. Capable of continuous flight, the Hermes StarLiner UAS can operate in adverse weather conditions both during the day and at night, improving mission effectiveness and increasing the number of missions that can be safely executed.

The unmanned aircraft will take off from and land in civilian airfields, and will be utilised for a wide range of environmental missions including detection of oil pollution, Ice Patrol and Reconnaissance, wildlife survey, Fisheries Patrol and others. Deploying the UAS will enable Transport Canada to maintain persistent surveillance over vast bodies of water and long coastlines.

The Honourable Marc Garneau, Canada’s Minister of Transport, said in a Government of Canada news release: “Canada is committed to protecting our endangered species and our marine environment. Integrating remotely piloted aircraft into our fleet will make our surveillance operations more robust than ever. The National Aerial Surveillance Program also helps with search and rescue, humanitarian efforts, illegal fishing enforcement, and the development and regulation of Canada’s drone industry.”