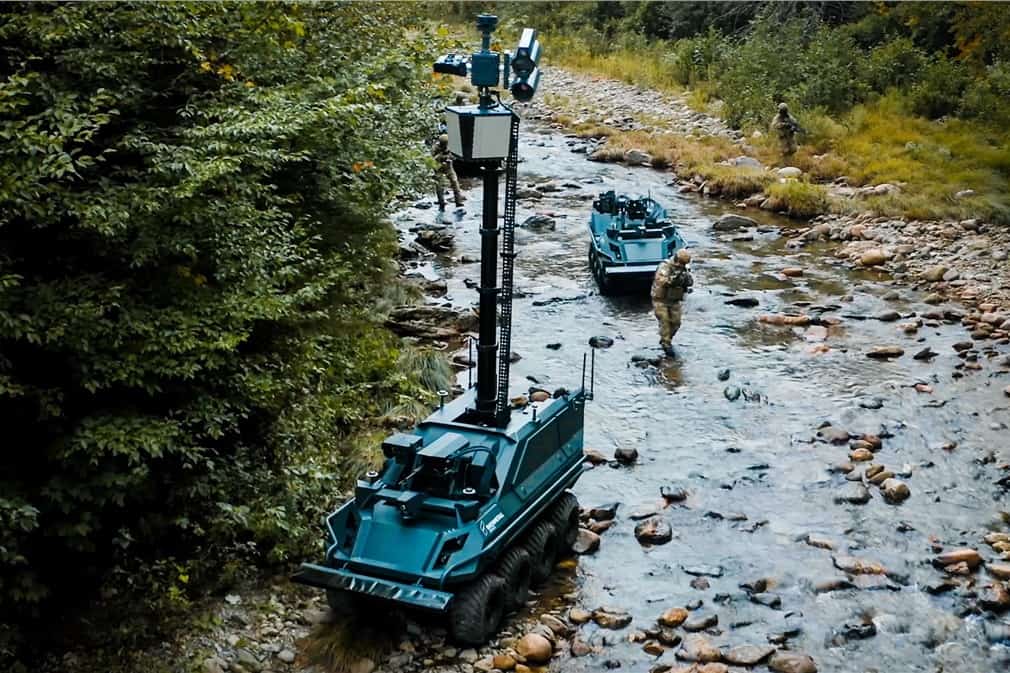 Rheinmetall has unveiled the latest member of its Mission Master autonomous Unmanned Ground Vehicle (UGV) family, the Mission Master – Armed Reconnaissance. The vehicle is equipped with a Rheinmetall Fieldranger remote-controlled weapon station (RCWS) and tactical intelligence-gathering technology, and is designed for reconnaissance missions and to provide frontline fire support when necessary.

The Mission Master – Armed Reconnaissance allows armed forces to conduct high-risk scouting missions and gain a real-time common operating picture while minimizing risk to ground troops. It carries a suite of state-of-the-art payloads including long-range EO/IR sensors, a surveillance radar, a 360° full ring camera, a laser rangefinder and a laser designator to identify potential threats. The reconnaissance payload is installed on a 3.5-metre expandable mast with a tilting mechanism, allowing the vehicle to gain enhanced line of sight while maintaining concealment.

Like all members of the Mission Master family, the Armed Reconnaissance incorporates the Rheinmetall PATH autonomous kit (A-kit), which is designed to enable military vehicles to operate in unmanned mode, freeing up soldiers for other duties and keeping them out of immediate danger. The A-kit provides a wide range of teleoperation options for the Mission Master, including a tablet, smartwatch, soldier system, and single-hand controller. These devices enable full access to advanced PATH features such as follow-me, convoy and autonomous navigation modes. Each control mode incorporates multiple layers of protection to ensure that the vehicle operates safely at all times, and there is always a man-in-the-loop for all fire operations. The Armed Reconnaissance version is also networked to the Argus soldier system and Rheinmetall Command and Control Software, which can be installed in any user’s battle management system.

Multiple Mission Master vehicles can efficiently operate as a team using Rheinmetall’s Wolf Pack capability, accomplishing missions of all types including zone surveillance, reconnaissance, target position transfer and slew-to-cue. All Wolf Pack units communicate with each other and use artificial intelligence to maintain the total situational awareness necessary for carrying out their missions.

UGVs networked with Wolf Pack can be managed by a single operator from anywhere using the LTE network, SATCOM, or military cloud. Wolf Pack allows one operator, instead of multiple uncoordinated operators, to focus on the overall mission rather than managing all the tasks of each UGV.