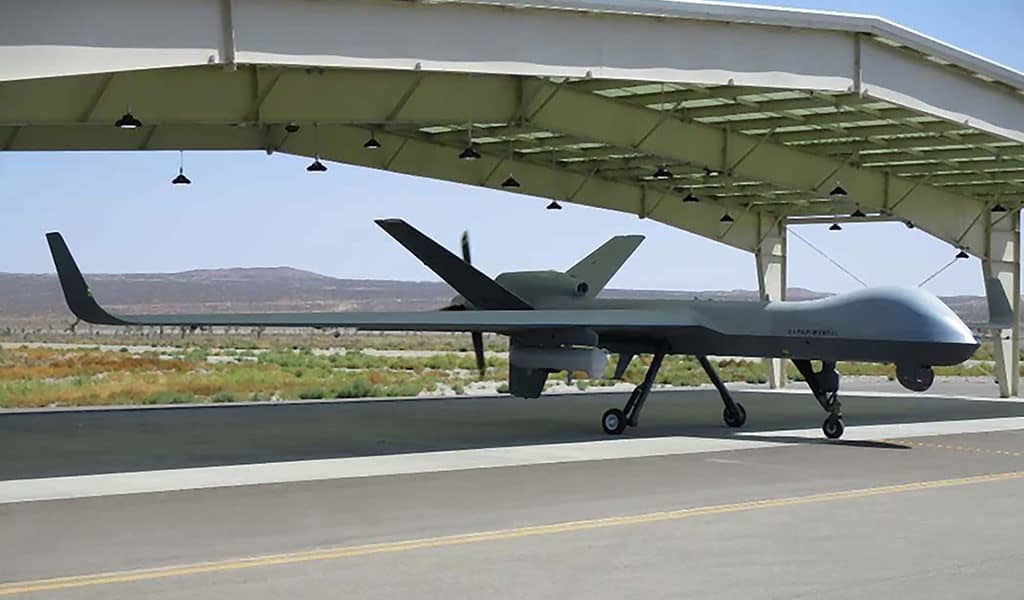 The goal of the demonstration was to prove emerging ABMS technologies in support of USNORTHCOM and USSPACECOM homeland defense priorities. The GA-ASI aircraft passed their targeting data to the ABMS cloudONE architecture, fulfilling a key ABMS demonstration objective of linking distributed sensors to Joint All-Domain Command and Control (JADC2) elements and strike aircraft.

The first UAS, flying at White Sands Missile Range, was a GA-ASI-owned MQ-9 configured with a Rosetta Echo Advanced Payload (REAP) gatewayONE communications pod. The REAP pod has been developed under contract from the Air National Guard and demonstrated a communications relay capability for both Link-16 and the Silvus meshONE network, providing seamless connectivity between air and ground participants in the demonstration area. Additionally, the MQ-9’s Lynx Synthetic Aperture Radar (SAR) found, tracked and passed targeting data for a simulated Ground Launched Cruise Missile (GLCM) vehicle.

GA-ASI also flew two of its King Air manned aircraft equipped with the Lynx SAR payload as part of the exercise. One of the King Air aircraft operated in the Gulf of Mexico and employed the maritime wide area surveillance mode to search for and provide tracking data on a simulated sea vessel carrying a cruise missile. The second King Air operated at White Sands alongside the MQ-9 and was equipped with the MQ-9’s Lynx Video SAR capability, demonstrating the ability to maintain all-weather custody of mobile targets.

The MQ-9 fed its sensor data to on-board Visual Artificial Intelligence edge processors and distributed networking software that autonomously identified, classified and disseminated targets to other military systems, demonstrating edgeONE and smartONE technology. This was unique to the exercise and in line with GA-ASI’s philosophy to host-third party ABMS technologies.

Dave Alexander, President of GA-ASI, commented: “GA-ASI is committed to fulfilling the USAF’s ABMS and JADC2 vision. We were proud to support this exercise using our aircraft and sensor technologies, openly sharing our data through the cloud with all the other assets to dramatically shorten Commanders’ decision-making time. In addition, our engineers supported the combined Air Force Life Cycle Management Center (AFLCMC) Detachment 3, 556th Test and Evaluation Squadron, and 26th Weapons Squadron sortie in which an MQ-9 launched an AIM-9X air-to-air weapon against a surrogate cruise missile, which validated the MQ-9’s airbase defense credentials.”