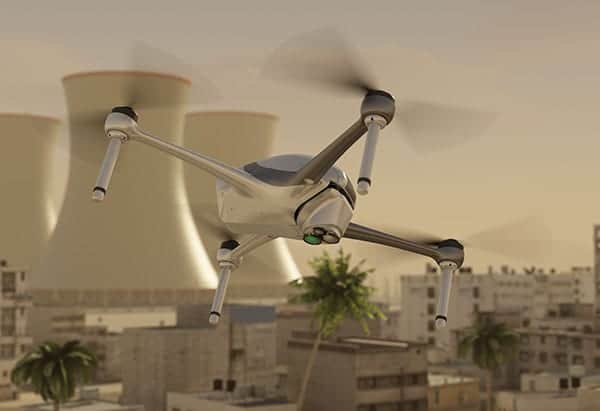 Following extensive testing in the laboratory and in the field, Laser Detect System (LDS) Ltd. has introduced SpectroDrone – the world’s first sensor system capable of detecting explosives, Improvised Explosive Devices (IEDs) and other chemical compounds from a safe, standoff distance.

Utilizing LDS’ laser-based explosive detection system, SpectroDrone detects explosives and other hazardous materials, in gas, liquid, powder or bulk form, at a distance of several meters from the threat. SpectroDrone can perform such missions over an operational radius of up to 3 Km. In addition to the detection of dangerous materials, SpectroDrone can remotely analyze different materials in real time, fulfilling essential role in mining and other industrial operations.

Shown here integrated on the Airobotics Optimus drone – a high capacity multi-mission multi-rotor drone – SpectroDrone automatically detects and analyzes explosives materials and IEDs, hazardous compounds, and narcotics from a distance, in addition to its surveillance role, thus enhancing situational understanding and real-time response to emergency situations. The SpectroDrone payload can also be mounted on ground robots and in fixed operation such as LDS’ SPHERE vehicle inspection systems.

“We are very excited to unveil this innovative solution for security and anti-terror applications at Israel’s HLS & Cyber, “said Eli Venezia, LDS founder, and President, “We are also encouraged by the great promise our technology offers for commercial applications.”

“When running security, emergency or surveillance missions in an industrial environment, the ability to dynamically and swiftly replace payloads, as well as introduce new innovative ones, is a real step forward,” says Ran Krauss, CEO, and Co-Founder of Airbotics. “The next generation of security lies in introducing unique technological capabilities, which I believe LDS and Airbotics bring jointly to market.”