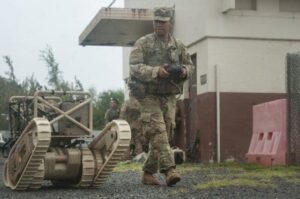 The U.S. Army has announced that it has tested prototype unmanned systems during a training initiative which lasted more than two weeks. Soldiers of the 25th Infantry Division tested and operated new robotic prototypes designed to allow them to do everything from gaining a bird’s eye view of the battlefield to moving assets by remote.

Tollie Strode Jr., senior project officer at Maneuver Center of Excellence Maneuver Battle Lab, Fort Benning, Georgia, explained the overall importance of employing these innovative capabilities in the field. He said the initiative, called PACMAN-I, is a step in a process that started in 2014 at his lab.

“We got together and, looking at (Department of Defense) guidance and Army guidance, (we) began the process of learning how to fight in formations with robotics to do the things that you would expect those robotics to do – allow us to see further, allow us to shoot at targets,” he said.

“And then (we looked at how) to improve the survivability and the mobility of the force and the Soldiers that are fighting.”

Although the manned and unmanned prototypes can perform in combat operations, Strode emphasized that they have the potential to be just as effective in stability and support roles.

“The biggest thing that we need to understand is how the technology that we have at our disposal through this training can help us to be even better…and improve our ability to successfully complete the mission,” Short said.

Staff Sgt. Robert Ramsey and Spc. Cole Cumby had the chance to test the MUTT and found that it wasn’t difficult to operate.

“There are two different controls, one is used just by one hand and the other actually has a screen on it that controls the turret itself and the MUTT,” Cumby said. “I like working with it, there’s a lot of good things about it, and there are things I’d change.”

As the Soldiers experimented with the technology, they were recorded by engineers from the U.S. Army Tank Automotive Research, Development and Engineering Center and the Maneuver Center of Excellence. The engineers will draw on the solders’ experiences to refine the technology.

Secretary Fanning observed that collecting the soldiers’ feedback is a vital step toward the eventual adoption of the new technology.

“We need to be making sure we’re fielding new technology as quickly as we can,” he said. “It doesn’t do any good if we’re just investing in great technology if we don’t actually get it into the field for Soldiers.”