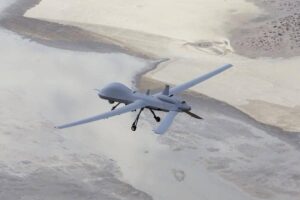 General Atomics Aeronautical Systems, Inc., a manufacturer of Remotely Piloted Aircraft (RPA), has announced that it has been awarded a full-rate production contract by the U.S. Army for 19 Improved Gray Eagle (IGE) Unmanned Aircraft Systems (UAS).

“We are very pleased that the Army has awarded us this production contract for IGE, which delivers a high-value solution for accomplishing multiple mission types, all at an affordable cost,” said Linden Blue, CEO, GA-ASI. “IGE provides better endurance, additional payload capacity, easier maintenance, and extended life cycle of critical components.”

IGE is a next-generation advanced derivative of the Army’s mission-proven Gray Eagle UAS that has accumulated over 228,000 flight hours since 2008. Developed on Internal Research and Development (IRAD) funds, GA-ASI built upon the success of its Gray Eagle predecessor, delivering improved capabilities that will perform ISR collection and close air support of ground forces through longer persistence, a variety of sensor and weapons payloads, and extended range that affords the ability to operate from safe locations and transit into areas of conflict.

IGE easily can be fielded with baseline Gray Eagle units because there are limited differences in operating, maintaining, and training between the two aircraft types. Due to many hardware and software commonalities with Gray Eagle, IGE can be based, maintained, and operated in the same units and at the same locations as Gray Eagle, providing the Army with flexibility in manning and logistics to support UAS operations.

IGE is engineered with a Maximum Gross Takeoff Weight (MGTOW) of 4,200 pounds compared with Gray Eagle’s MGTOW of 3,600 pounds. The incorporation of IGE’s straight belly design allows for 850 pounds of internal fuel load and a centerline hard point that can accommodate an optional fuel pod with an additional 450 pounds. With endurance at nearly 40 hours, IGE will exceed the Army’s requirement for 14 hours on station at 1,000 kilometers for all mission types, including reconnaissance, surveillance, communications relay, electronic warfare, and attack.