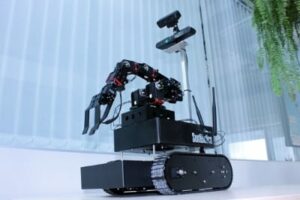 Neurotechnology, a developer of robotics and high-precision object recognition and biometric identification technologies, has announced the release of the SentiBotics Development Kit 2.0. SentiBotics is designed to help robotics developers and researchers reduce the time and effort required to develop mobile robots by providing the basic robot infrastructure, hardware, component-tuning and robotic software functionality.

“This new version of the SentiBotics robotics kit contains not only substantial improvements to existing features but additional functionality as well,” said Dr. Povilas Daniusis, Neurotechnology robotics team lead. “These new capabilities not only can save time and effort for developers of mobile manipulation control systems, they also enable SentiBotics to serve as an educational platform for use at universities.”

The new SentiBotics Development Kit 2.0 includes motion planning software and accurate 3D models of the robot, enabling the robot to grasp and manipulate objects while avoiding obstacles. The 3D object recognition and object grasping system also allows the robot to grasp arbitrarily-oriented objects. In addition, Neurotechnology has added the ability to use a simulation engine that enables robotics developers towork in virtual environments.

New features and upgraded components include:

All platform components can be easily obtained from manufacturers and suppliers worldwide, so robotics developers and researchers in private industry, universities and other academic institutions can use SentiBotics as reference hardware to build their own units or to incorporate different platforms and materials.