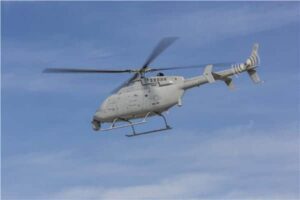 Northrop Grumman Corporation has announced that, in conjunction with the U.S. Navy, it has successfully demonstrated endurance capabilities with the MQ-8C Fire Scout unmanned helicopter. On a planned 10+ hour flight and range out to 150 nautical miles flight from Naval Base Ventura County, Point Mugu, the MQ-8C Fire Scout achieved 11 hours with over an hour of fuel in reserve.

The long range, long endurance flight was part of a series of capability based tests used by the Navy to validate their concept of operations and previously tested performance parameters. The Navy conducted the demonstration with support of Northrop Grumman engineers.

“Endurance flights provide a full evaluation of the MQ-8C Fire Scout systems,” said Capt. Jeff Dodge, program manager, Fire Scout, Naval Air Systems Command. “We can better understand the capability of the system and look at crew tasks and interactions in a controlled environment. This will allow us to adjust operational procedures to maximize the system’s effectiveness.”

This is a new flight record set for the MQ-8 Fire Scout; a system designed to provide persistent reconnaissance, situational awareness, and precision targeting support for ground, air and sea forces.

The MQ-8C Fire Scout completed its developmental flight test program earlier this year and has operational assessment planned for later this year. The aircraft has accumulated over 513 flight hours and flown 353 sorties.