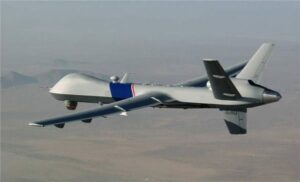 General Atomics Aeronautical Systems, Inc. (GA-ASI), a manufacturer of Remotely Piloted Aircraft (RPA) systems, radars, and electro-optic and related mission systems solutions, has announced that it has successfully flight-tested a pre-production Due Regard Radar (DRR), marking the first fully functional air-to-air radar on a RPA that meets the requirements for “Due Regard” operations in international airspace.

“This flight test is the culmination of over four years of radar development activity,” said Frank Pace, president, Aircraft Systems, GA-ASI. “DRR will allow users to operate Predator® B independently in international airspace without the need for land-based, sea-based, or off-board airborne airspace surveillance, offering our customers greater freedom of movement around the globe.”

The purpose of the test was to verify the DRR’s functionality onboard a Predator B RPA, plus integration with the Traffic alert and Collision Avoidance System (TCAS) II with Resolution Advisories, which is the collision avoidance system used on many commercial aircraft today. The collision avoidance maneuvers were automatically and successfully executed onboard Predator B to verify system functionality and validate hardware-in-the-loop simulations.

“This latest flight test aboard an RPA is a significant milestone in the continued maturation of our DRR air-to-air radar program that began in 2011,” said Claudio Pereida, executive vice president, Mission Systems, GA-ASI. “We are honored to be leading the effort to help define standards for flying aircraft such as Predator B in the National Airspace System in close cooperation with the FAA, NASA, and our industry partners.”

Throughout December, multiple flight tests occurred at GA-ASI’s Gray Butte Flight Operations Facility and Edwards Air Force Base in Palmdale, Calif. Predator B was flown in scripted encounters against multiple small- and medium-sized manned aircraft while the pre-production DRR simultaneously tracked multiple targets and continued to search a wide Field-of-Regard (FoR).

GA-ASI’s Due Regard capability, which includes the pre-production DRR and other components, is now at Technology Readiness Level (TRL) 7 and is ready for a customer to take into an operational environment to conduct an Operational Test and Evaluation (OT&E). The company’s Sense and Avoid (SAA) system, which integrates the DRR and TCAS II capabilities, is currently at TRL 6 and will mature once it incorporates all of the requirements being developed by Radio Technical Commission for Aeronautics (RTCA) Special Committee 228. The integrated SAA system will continue to fly aboard NASA’s Ikhana (Predator B) in 2015 in support of a series of NASA flight tests that will measure the performance of the entire system in a variety of situations.