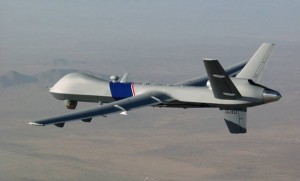 Tests were conducted on the Predator® B UAV

General Atomics Aeronautical Systems, Inc., a leading manufacturer of Remotely Piloted Aircraft (RPA), tactical reconnaissance radars, and electro-optic surveillance systems, has announced the completion of the first of several planned flight tests of a Sense and Avoid (SAA) architecture and Self Separation functionality. This marks the first time the system has functioned as a true “system of systems” to detect every class of aircraft equipage and paves the way for a Due Regard capability.

The purpose of the test was to integrate and synchronize BAE Systems’ AD/DPX-7 Identification Friend or Foe (IFF) transponder with Automatic Dependent Surveillance Broadcast (ADS-B) IN, GA-ASI’s air-to-air radar, called Due Regard Radar (DRR), and Honeywell’s Traffic Alert Collision Avoidance System (TCAS) TPA-100 to detect and track cooperative and non-cooperative aircraft. The prototype DRR tracked multiple targets of opportunity, in addition to participating aircraft, throughout 40-plus scripted encounters, including some aircraft not tracked by Air Traffic Control. Sensor data collected by these systems during the flight test will be used by the FAA and industry participants to develop and further refine their algorithms, which will in turn lead to a proof-of-concept SAA system including Collision Avoidance.

“We are working closely with the FAA, NASA, the U.S. Department of Homeland Security [DHS], and our industry alliances to advance the safe and efficient integration of unmanned aircraft systems into domestic and international airspace,” said Frank W. Pace, president, Aircraft Systems Group, GA-ASI. “Our Sense and Avoid capability is a key part of that goal, and we continue to make ongoing progress towards this end.”

The flight test occurred November 18-20 at GA-ASI’s Gray Butte Flight Operations Facility in Palmdale, Calif. During the test, a company-owned Predator® B leveraged its SAA system to detect two participating intruder aircraft with all three sensors. The Honeywell sensor fusion algorithm excelled in combining the multiple sensors’ outputs and fusing them into a single track picture to send to the ground. Tracks were displayed in the ground control station using GA-ASI’s Conflict Prediction and Display System (CPDS), which is designed to aid pilots in making maneuvers to remain well clear of other traffic.

The results of this flight test follow GA-ASI’s successful demonstration and follow-on integration of ADS-B aboard DHS/Customs and Border Protection’s (CBP’s) Guardian RPA (the maritime variant of Predator B) in 2012 and the successful test of DRR on the company’s Predator B also last year.