Today’s naval forces rely primarily on highly capable multifunctional manned platforms, such as ships and submarines. Even the most advanced vessel, however, can only be in one place at a time, making the ability to respond increasingly dependent on being ready at the right place at the right time. With the number of U.S. Navy vessels continuing to shrink due to planned force reductions and fiscal constraints, naval assets are increasingly stretched thin trying to cover vast regions of interest around the globe. To maintain advantage over adversaries, U.S. naval forces need a way to project key capabilities in multiple locations at once, without the time and expense of building new vessels to deliver those capabilities. 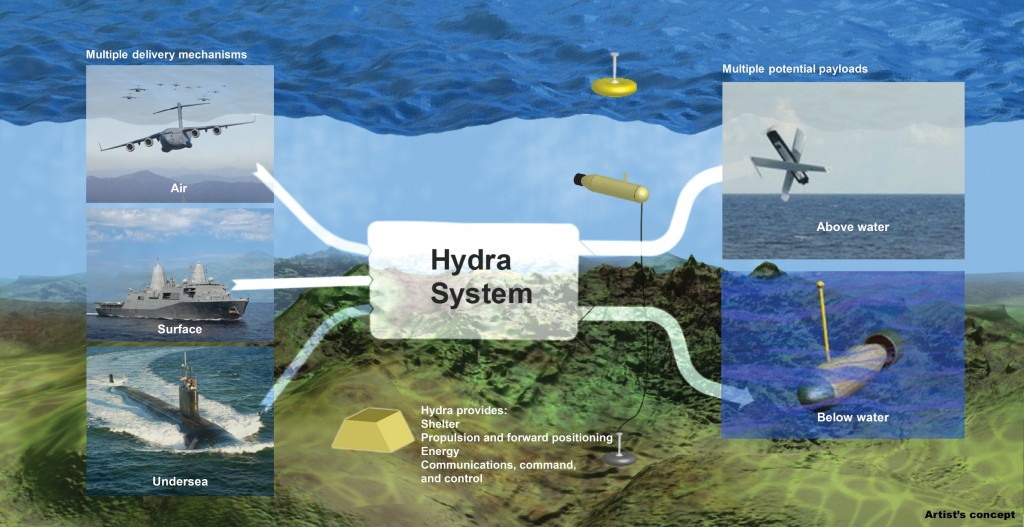 DARPA has initiated the Hydra program to help address these challenges. Named for the multi-headed creature from Greek mythology, Hydra aims to develop a distributed undersea network of unmanned payloads and platforms to complement manned vessels. The system would integrate existing and emerging technologies in new ways to create an alternate means of delivering various capabilities above, on and below the ocean’s surface. The goal is to create a force multiplier that enables rapid, scalable and cost-effective deployment of assets close to the point of use.

“The climate of budget austerity runs up against an uncertain security environment that includes natural disasters, piracy, ungoverned states and the proliferation of sophisticated defense technologies,” said Scott Littlefield, DARPA program manager. “An unmanned technology infrastructure staged below the oceans’ surface could relieve some of that resource strain and expand military capabilities in this increasingly challenging space.”

DARPA seeks ideas and technical proposals for how to best develop and implement the Hydra system. The agency hosted a Proposers’ Day on Aug. 5, 2013, at the Johns Hopkins University Applied Physics Laboratory in Baltimore, Md.

Key to the effort is the development of modular payloads that would provide key capabilities, including Intelligence, Surveillance and Reconnaissance (ISR) and Mine Counter-Measures (MCM). Each payload module would plug into a standardized enclosure that would securely transport, house and launch various payloads, while sustaining payload functionality for weeks to months. The Hydra system would emphasize scalability, rapid reconfiguration and maximization of payload. Ships, submarines or airplanes could deliver the Hydra system to littoral ocean zones (shallow international waters near shorelines).

“By separating capabilities from the platforms that deliver them, Hydra would enable naval forces to deliver those capabilities much faster and more cost-effectively wherever needed,” Littlefield said. “It is envisioned to work across air, underwater and surface operations, enabling all three to perform their missions better.”