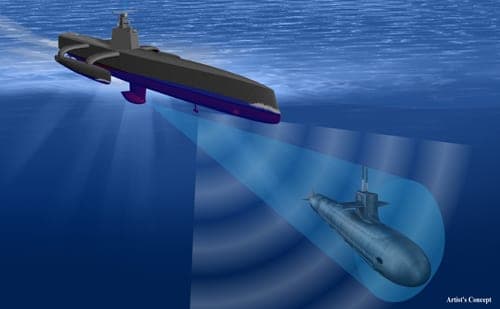 Potential adversaries have shown an increasing ability to build quiet diesel-electric submarines, and the Pentagon has had enough.

The Defense Advanced Research Projects Agency has awarded a contract to McLean, Va.-based Science Applications International Corp. to develop an unmanned vessel that can track these subs for months at a time over thousands of kilometers.

Under the Anti-Submarine Warfare Continuous Trail Unmanned Vessel (ACTUV) program, SAIC will design and construct the sea drone and demonstrate its ability to keep watch on quiet subs with minimal input from humans. If successful, the program could help reduce manpower and other costs associated with current anti-submarine warfare operations. It also could lead to ship designs that do away with constraints associated with conventional naval architecture such as layout, accessibility and crew support systems.

“Our goal is to transition an operational game-changer to the Navy,” DARPA Program Manager Scott Littlefield said in a prepared statement. “This should create an asymmetry to our advantage, negating a challenging submarine threat at one-tenth [an adversary’s] cost of building subs.”

The program will combine advanced software, enough autonomy that the vessel can operate safely in accordance with maritime laws and sensors powerful enough to continuously track the quietest of subs, officials said.

The unmanned ship would not actually hunt subs. That job could be handled by a network of small unmanned underwater vehicles DARPA is developing that scan upwards from deep in the ocean. After enemy vessels are found, ACTUV would be employed to follow them wherever they went without putting sailors in danger.

An operational prototype is scheduled to be tested at sea in 2015.