The Vigilant, Forward Looking Sonar (FLS) system has been developed by Wavefront Systems Ltd in the United Kingdom and manufactured by Wavefront’s sister company, Sonardyne International. Vigilant is a world class navigation and obstacle avoidance sonar designed for use on regular ships, unmanned surface vessels (USVs) and both manned and unmanned underwater vehicles. It automatically provides the long range detection of objects and obstacles that may present a threat to the navigation of the vessel, displaying an obstacle’s position in the water column and creating a digital terrain map of the seabed topography, thereby showing where it is safe to navigate. These data can then be exported to third party command and control systems or displayed on our own user interface.

The system comprises two operating modes. In DEPTH mode, Vigilant produces accurate 3D bathymetric and color-coded depth imagery out to a range of 600 m and depths down to 100 m below the vehicle over a 120-degree field of view. In SONAR mode, Vigilant processes the intensity of the acoustic data to extract long range positional data out to 1.5 km and over the same 120-degree field of view. The sonar returns are used to generate alerts highlighting the presence of navigationally relevant hazards.

Wavefront Systems has a proven track record for installing the Vigilant FLS onto various platforms including luxury private ships, manned military submersibles and unmanned underwater vehicles (UUV). This presentation follows one specific installation, using it as a case study to allow us to discuss the process of installation, integration, and configuration. However, most importantly, it allows us to share the results.

In March 2021 a United Kingdom’s Defence and Security Accelerator’s (DASA) competition sought proposals for novel and innovative sensors and payloads to be trialled on an Extra-Large, Uncrewed, Underwater Vehicle (XLUUV). The project, being run jointly by the Royal Navy and the Defence Science and Technology Laboratory (DSTL) was being utilized onboard the Plymouth, UK based MSubs’ XLUUV test platform and was sea-trialled in the area immediately south of Plymouth Sound. 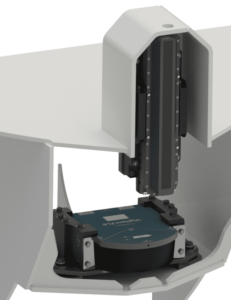 2.1 Integration onto the test platform
The Vigilant FLS consists of two in-water phased-arrays: a projector array which sends frequency encoded ultra-sonic sound energy into the water and a multi-element hydrophone receiver which electronically scans 120° of azimuth in front of the vehicle, capturing the returning energy.

One of the key aspects of the Vigilant FLS system is the ability to export the sonar data acquired to third party software, allowing overlaying the data onto other systems or feeding directly into command and control (C2) software packages to allow automatic adjustment of the course in order to avoid the obstacle or threat.

In order for the Vigilant system to know where it is in the world and for it to understand how it is moving through that world, the system can receive and interpret navigation data. The system requires a global position, heading information and, when installed on a submersible vehicle, the dive depth. Multiple formats can be interpreted from standard NMEA messages to more proprietary protocols from specific sensors.

The MSubs platform had already been fitted with Sonardyne International’s world class combined inertial navigation sensor (INS) and doppler velocity log (DVL) sensor, the Sprint-NAV 700. As such we were able to receive the proprietary LNAV(UTC) message from the unit.

Whilst the data can be exported as a layer onto an Electronic Navigational Chart (ENC or ECDIS), the system’s GUI can also be pre-loaded with standard or securely encrypted electronic charts (S57 or S63). The system can then automatically crop the data it acquires to the layers of the ENC, greatly improving the end user’s experience.

2.2 Sea-trials
The first test of the Vigilant FLS installation on the MSubs XLUUV platform took place 4.2 NM south of Plymouth Breakwater in a water depth of around 50 m in an area known locally as the ‘Spoiling Ground’.

The primary purpose of this initial trial was to test that the FLS system could receive position, heading, pitch, roll and depth information from the vehicle’s internal systems and export the processed data to the desired location.

Once all parties were satisfied that the navigation data was being received correctly and that the processed FLS data was being exported properly, it was agreed to move to the primary trials area known as ‘Hand Deeps’.

Hand Deeps is a granite reef located 8 NM south-west of Plymouth Sound’s Rame Head. The reef being located just WNW of the infamous Eddystone lighthouse. The seabed of sand and broken shell extends down to 55 m. The outcrop rises up to 9.5m depth.

We believe the data generated by the system to be class-leading, both in terms of quality – assured by our proprietary Altitude Confidence Filtering (ACF) algorithms and quantity – assured by our high resolution physical array design, delivering the potential for imaging bathymetry out to ranges of 20 times the prevailing water depth ahead of the platform.

This is the third generation of FLS product from Wavefront spanning nearly a decade of developmental effort. Each new generation has learnt constructively from the past design iteration.

Second generation NOAS 2 products switched focus onto the commercial sector and helped begin development of a more user friendly intuitive MMI intended for civilian use, with no assumed prior knowledge of bridge based real-time imaging sonar.

The third generation of FLS product – ‘Vigilant’ – is the topic for this paper. The sonar is far more compact for ease of installation either as new build or retrofit, and yet delivers significantly greater ‘raw’ sonar performance. The MMI has continued to evolve, demanding very little operator interaction (it can even be placed under full AI automatic control) whilst the signal and data processing have been comprehensively updated.

Wavefront Systems Ltd, would like to thank MSubs Ltd and Submergence Group, for the use of the data produced from the Vigilant systems used on their vehicle. Along with Sonardyne Plymouth and their trials facility for the use of their surface vessels.

Andy Millar (MNI). Has an extensive background in the maritime industry gained from sailing on commercial vessels and senior roles in Europe and the Americas for maritime service companies. Most recently joining Wavefront Systems in 2021 as Head of  Sales for their world class Sonar systems.