Wingtra has released a case study detailing the use of its WingtraOne Unmanned Aerial Vehicle (UAV) to aid BNI Coal’s mine surveying missions at the Center Mine site in North Dakota, US. 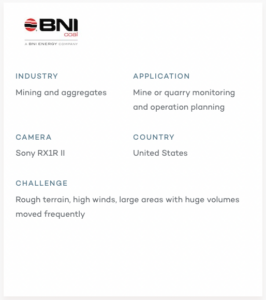 Based in Bismark, North Dakota, BNI Coal Ltd. supplies about 4.5 million tons of lignite coal per year to power a nearby steam electricity generating station. These assets are surface mined from the Center Mine—near Center, North Dakota—at a rate of about 210 acres a year. As a matter of policy, the same area each year is reclaimed to pasture or farmland in the wake of operations. With all these demands, mining surveying with drones has proven to be a major benefit.

“Our 8200 dragline is removing 40,000 to 60,000 yards (3-5 ha) a day,” said Tyrell Murrey, Surveyor and Certified Drone Pilot at BNI Coal. “It’s digging out existing ground that’s never been touched and throwing it in a big pile to uncover the coal. We can’t get on top of that huge volume of dirt safely to get an accurate survey.”

Because accurate volumes were also impossible when driving or walking thousands of acres with survey equipment, BNI used to hire out manned aircraft surveys to give quarterly active area views to the Federal Government. The government owns the mineral rights, so these reports were mandatory, and BNI paid the high price. However, manned aircraft surveys were too expensive to hire more often for site management.

“The cost of manned aircraft mining surveys was very prohibitive. In order to survey more often, to keep accurate volumes, and to plan for those volumes, we needed something different, and the UAV just worked great for that,” said Tyrell Murrey, Surveyor and Certified Drone Pilot at BNI Coal.

How long do mine surveys take?

Advanced drone mine surveying with WingtraOne

In the case of Center Mine, the site needs to be tracked carefully in order to report on things like how much coal was unearthed and moved, activity for land owners, and topsoil volumes needed to reclaim land after mining. With so much dirt moving and stock to keep track of as accurately as possible, mining drones that gather more frequent and better quality survey data offered an obvious benefit. So back in 2014, BNI adopted this tech right away to invest in its first fixed-wing drone solution—the senseFly Ebee.

“The eBee performed great for the time,” Murrey said. “It was an emerging technology back then. But we just didn’t get the coverage we needed per battery, and it didn’t perform how we expected. We’d have 40-50 percent battery, and it would quickly go down to zero and drop out of the sky, essentially. And then the wind was a big factor, the previous drone struggled with that.”

Murrey said because of unpredictable flight, the laptop flight control setup, and the way birds of prey loved to chase it, they always needed two pilots to survey the mine with their fixed-wing drone. When they discovered WingtraOne, a lot of things changed.

“The best thing that I found with the WingtraOne is the batteries have held up great; we get more coverage out of each set. It’s also better with the wind. I flew just the other day, and it was 20 mile an hour (32 kph) winds. You’re getting the high wind warning and still the accuracy has been there.”

The birds don’t find WingtraOne that interesting, either. To put the coverage difference into perspective, Murrey said they only need to run two or three flights a month with WingtraOne. They had to fly 4x more with the fixed wing. Before, they’d get 160 acres (65 ha) from one flight, and now they get 640 acres (260 ha).

“We’re flying a lot less because we’re flying bigger areas with WingtraOne. And we’ve gone down to a one person flight crew. The batteries have always performed; we take them down to 30% and always get back to the landing spot. And it’s bigger and easier to see, so there’s generally less concern with it,” said Tyrell Murrey, Surveyor and Certified Drone Pilot at BNI Coal. 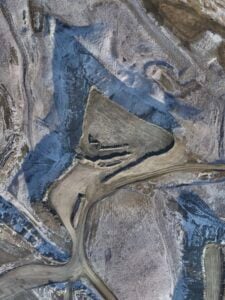 In every respect, drones help ensure safety on-site. First of all, having more accurate data about the volumes and positioning of moved dirt helps managers and workers understand the risk of being around it. Next, having a clear view of the site helps plan next moves with safety in mind. And finally, the surveyors themselves no longer need to go directly into the active areas except to measure ground points here and there.

“We’re more than willing to spend the money for safety reasons,” Murrey said. “I mean, right now the Wingtra is saving somebody from having to do what I used to do when we did stockpile surveys: be up on the top of them walking their perimeters, which are two-to-one slopes, things like that in the middle of winter. Safety-wise, it has helped out a lot.”

Surveyors at BNI learned that different drones offer different levels of security. Two things matter: how precisely they land, and the level of control they offer to quickly change plans in the air space. For example, Murrey said the Center Mine is surrounded by farmland, so crop dusters can swoop in at altitudes overlapping the drone’s path.

In such cases, he has more control with WingtraOne. Unlike the previous solution, he trusts it to fly predictably. He can bring it home autonomously with the touch of one button on the tablet. If he needs, he can take manual control and pause flight or move it in any direction.

“With our previous drone, we had a two person crew, because someone always needed to control the drone from the laptop plugged into the truck. Now with Wingtra and the little tablet, I can be walking around outside holding it in my hand looking for other aircraft … paying attention to what’s going on out there a lot better,” said Tyrell Murrey, Surveyor and Certified Drone Pilot at BNI Coal.