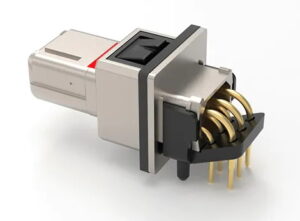 TE Connectivity has expanded its 369 connector series with the addition of new shielded rectangular panel and PCB connectors for environments that demand ambient EMI noise protection. These rugged connectors incorporate the benefits of the 369 series and create opportunities with additional applications such as ethernet, power distribution and mixed signal/power devices. The lightweight, small form factor design makes them ideal for platforms such as UAVs (unmanned aerial vehicles) and unmanned systems.

The new rectangular connectors have been tested to withstand indirect lightning strikes of 3.6ka and are rated to provide effective shielding of greater than 60 DB at low frequencies and greater than 40 DB at high frequencies. Their EMI protection technology is wrapped in a lightweight, non-toxic (RoHS-compliant) composite nickel shell that can lead to up to 75% weight savings. The 369 series shielded connectors enable various ethernet protocols and speeds up to 10Gbs. They are also backward compatible with current 369 product offerings.