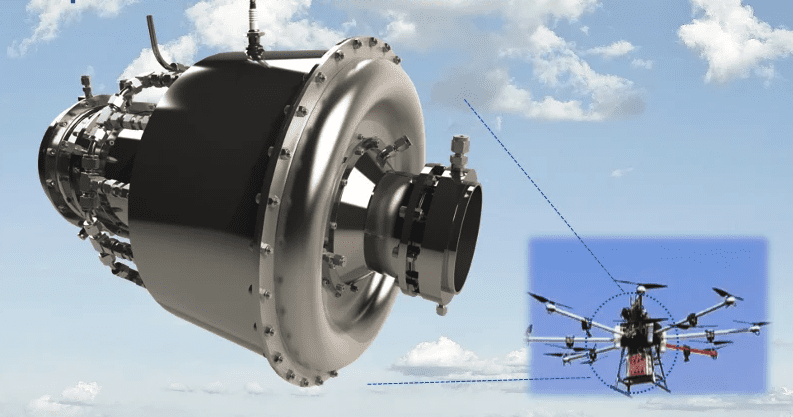 Aero Development Japan Co., Ltd. (ADJ) has succeeded in developing a mass-produced model of a hybrid power system and will start accepting pre-orders. ADJ will showcase the hybrid power system at the Japan Drone exhibition held at Makuhari Messe, Japan from June 21st to 23rd, 2022.

The market for large drones and flying cars is growing in countries around the world, including Japan, but there are major challenges for practical use concerning power sources. Often lithium-ion batteries, which have been used as a power source for smaller drones, cannot be said to have sufficient power generation (kWh / kg) per unit weight for larger drones to fly for a long time. Increasing the flight time reduces the payload, and increasing the payload reduces the flight time. Against this background, there has been a demand for the development of power sources with higher output per unit weight.

In June 2021, ADJ completed a prototype hybrid power system and successfully levitated a drone with a total weight of 80 kg equipped with the system. An Austrian gas turbine was used for the prototype model at this time, but in order to mass-produce it in Japan and further improve performance and speed, hybrid power using a domestic gas turbine (ADJ’s original design) has been used since August 2021. ADJ has been developing a mass production model (power generation power 30kW, rotation speed 90,000rpm) which passed the output test in early June 2022.

Based on this result, ADJ has decided to unveil the mass production model of the hybrid power system for the first time at Japan Drone 2022.

Signs that deregulation will open up the Japanese market

Manufacturers of large drones (unmanned) or flying cars (manned) have started to emerge in countries such as China, the United States, the United Kingdom, Israel, and Australia. In Japan, the market for large drones and flying cars is about to open up. Drone regulations in Japan are mainly set for levels 1 to 4 centering on whether or not to fly over populated areas, and whether or not to fly outside the sight of the operator. Deregulation has progressed in Japan, in June 2021, the “Law for Partial Amendment of the Aviation Law, etc.” was enacted, and will be enforced from December 2022 . With this revision of the law, Level 4 – flight over populated areas and BVLOS (beyond visual line of sight) operation will be possible. It is said that heavy goods transportation using large drones will proceed even in the city center.