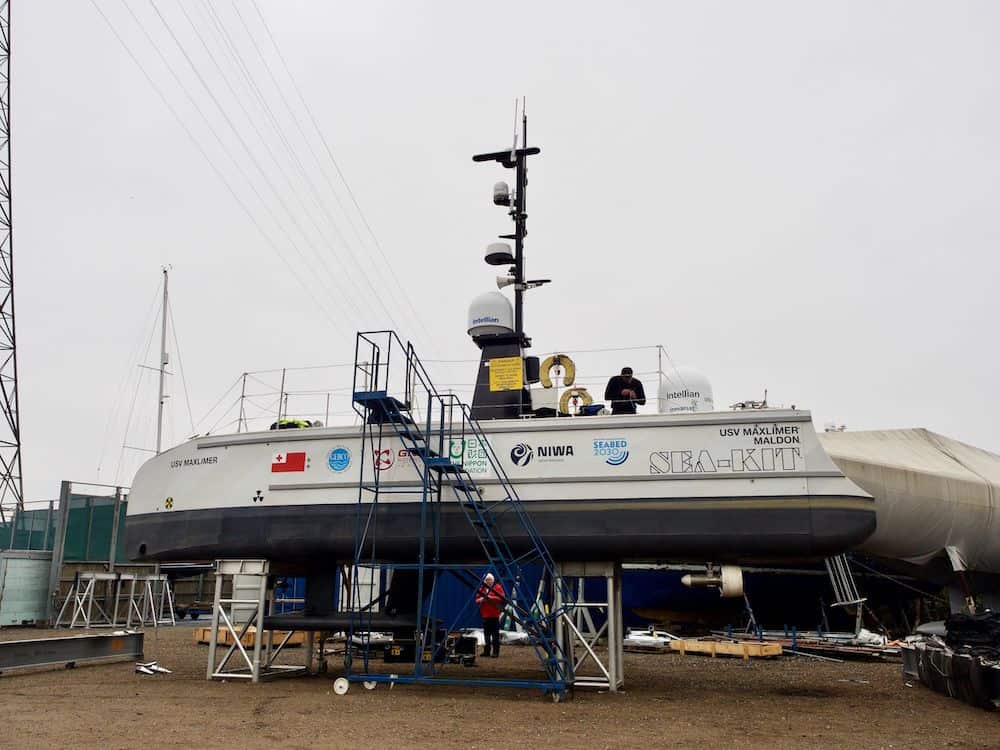 SEA-KIT International’s Uncrewed Surface Vessel (USV) Maxlimer will be used to improve understanding of the nature and impact of the Hunga-Tonga Hunga-Ha’apai (HT–HH) volcanic eruption in Tonga.

NIWA and The Nippon Foundation are sailing to Tonga to survey the ocean around the volcano and surrounding regions. They will be surveying thousands of square kilometers of the seafloor and collecting video images of the eruption’s impact from NIWA’s research vessel, RV Tangaroa, using the Maxlimer USV to conduct further mapping.

“Before the eruption, much of the volcano was above water but now none of it is and the neighboring islands of Hunga Tonga and Hunga Ha’apai were reduced in size. We expect similarly dramatic changes to have occurred in the underwater topography,” said project leader and NIWA Chief Scientist Oceans, Mike Williams. “Submarine cable breakages show impacts up to 50 kilometers from the volcano caldera, implying changes to the seabed over an area of at least 8,000 square kilometers. This survey will investigate the impacts of the eruption in the water column and on the seabed around HT–HH.”

The Nippon Foundation Chairman, Dr Yohei Sasakawa, says that this research is vital to help protect people from similar natural disasters in the future: “By working together, we have the power to help solve some of the biggest problems facing society, including the fall-out from natural disasters. We hope that this work will help researchers and governments understand and mitigate the risk of future eruptions, which will be of particular benefit to countries that lie within proximity of these threatening natural wonders, like Japan and New Zealand.”

“[The eruption] covered our main island of Tongatapu in carpets of toxic ash, generated a sonic boom that travelled around the globe and caused a tsunami that resulted in deaths and damage as far away as South America,” said Tonga’s Deputy Secretary for Lands and Natural Resources, Taaniela Kula. “It also severed both submarine fiber optic cables connecting Tonga with the world, leaving our country in a prolonged ‘blackout’. The direct economic impact of the eruption is estimated by the World Bank to be over $US90m. As a country we’re building back slowly. We hope this research will help in the efforts to protect our nation and others like us in the future.”

The TESMaP project will take place in two parts – NIWA’s research vessel Tangaroa, will set sail 9 April to do the first part of the surveying. Following that, SEA-KIT’s 12-meter-long Maxlimer USV, in coordination with Seabed 2030, will remain at sea for an additional month of mapping and environmental data collection.

Ben Simpson, CEO, SEA-KIT International, says it is an exciting opportunity to demonstrate data collection using less than 2% of the fuel of a typical survey vessel:  “USV Maxlimer will be controlled from the other side of the world, at our base in the U.K., as she safely gathers a range of data types from inside the caldera for a full month to develop and support understanding of the eruption’s undersea impact.”

Scientists will gather acoustic data using echosounders to determine the shape and structure of the underwater landscape, including the thickness of ash deposits and the formation of any new bedforms. This data will then be compared with previous maps to identify areas for sampling, so that further changes to the area, such as impacts to marine life and the seafloor’s chemical composition, can be assessed.

“By working alongside and pooling resources with such a multinational team, we’ll be able to gather an incredible amount of information of what happens during eruptions like these, what the impacts are, and how we can be better prepared next time a similar event occurs,” said Kevin Mackay, head of the South and West Pacific Regional Center of Seabed 2030 and the voyage leader. “There is much we still don’t know about the natural world, especially what occurs under our oceans, so we’re delighted to take this opportunity to build our knowledge and help Tonga’s people and environment.”